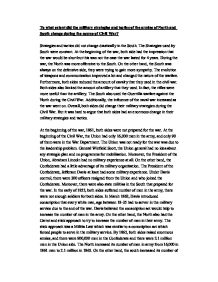 Strategies and tactics did not change drastically in the South. The Strategies used by South were constant. At the beginning of the war, both side had the impression that the war would be short but this was not the case the war lasted for 4 years. During the war, the North was more offensive to the South. On the other hand, the South was always on the defensive side, they were trying to gain more sympathy. The evolution of weapons and communication improved a lot and changed the nature of the warfare. Furthermore, both sides reduced the amount of cavalry that they used in the civil war. Both sides also limited the amount of artillery that they used. In fact, the rifles were more useful than the artillery. The South also used the Guerrilla warfare against the North during the Civil War. Additionally, the influence of the naval war increased as the war went on. Overall, both sides did change their military strategies during the Civil War. But it was hard to argue that both sides had an enormous change in their military strategies and tactics.

At the beginning of the war, 1861, both sides were not prepared for the war. At the beginning of the Civil War, the Union had only 16,000 men in the army, and only 90 of them were in the War Department. The Union was not ready for the war was due to the leadership problem. General Winfield Scott, the Union general had no idea about any strategic plan and no programme for mobilisation. Moreover, the President of the Union, Abraham Lincoln had no military experience at all. On the other hand, the Confederate had a little advantage of its military organization. The President of the Confederate, Jefferson Davis at least had some military experience. Under Davis control, there were 300 officers resigned from the Union and who joined the Confederate. Moreover, there were also state militias in the South that prepared for the war. In the early of 1852, both sides suffered number of men in the army, there were not enough soldiers for both sides. In March 1862, Davis introduced conscription that every white man, age between 18-35 had to server in the military service due to the end of the war. Davis believed the conscription act would help to increase the number of men in the army. On the other hand, the North also had the Carrot and stick approach to try to increase the number of men in their army. The stick approach was a Militia Law which was similar to a conscription act which forced people to serve in the military service. By 1865, both sides raised enormous armies, and there were 900,000 men in the Confederate and there were 2.1 million men in the Union side. The North increased its number of men in army from 16,000 in 1861 men to 2.1 million in 1865. On the other hand, the south increased its number of men in the army from 160,000 in 1861 to 900,000 men in 1865. Statistically, both sides had increased their number of men 10 times or even 20 times more in 5 years.

Both sides have also changed their tactics on offensive and defensive. Once the rifle-musket was used by both sides, the defending force always had a great advantage. This was because most of the soldiers were in trenches when they were defending. However, the attacking force had to move forward to be able to captured enemy’s flank. The Consequence was that casualties would be heavier on the attacking side. It was hard for the attacking side to win the battle. In large scale battle, attacking force formed 2 lines. First line was working forward to try to kill as many enemies as they could. Second line would be fed in to restore the attacks momentum. Each line had about 1000 men. Again, casualties would be heavier on the attacking side because while they were attacking, they were in open ground without any protection. In May 1864, 19 millions bullets were fired in a single week in North Virginia. As the number of bullets that were fired in a week, it is easy to imagine the amount of soldiers who died on the battle field. Moreover, the Confederate used Guerrilla warfare during the war. There were guerrilla dimension in Missouri, Kentucky, Arkansas and Tennessee. The guerrilla warfare helped the confederate but this help was very limited, because guerrilla warfare was not popular at that time. Overall, the new tactics on offensive and defensive leads to huge amount of casualties on the battle field, and there was a significant change in the tactics of offensive and defensive during the Civil War.

The evolution of weapons and communications has changed the nature of the warfare. In previous wars, both sides were still using the smoothbore musket which only had about 100 yards range. But in 1855, both sides were using rifled weapons instead of smoothbore musket. Those rifled weapon with the adoption of the minie ball have the shooting range up to 600 yards. In fact, it was more accurate. These improvements of the weapons made a huge impact on the battle field. Of course, the consequence was more casualties in both sides. The communication in both sides has also improved a great deal. Both sides had developed more railway tracks, so men and resource could travel around and supplied more efficiently. There were also steamboats in both sides that played an important supply role on the Mississippi and its tributaries. Moreover, there was telegraph that enabled the commanders to communicate with his units even if there were far away from each other. Both North and South strategy and tactics were affected by improvements in communication.

The use of cavalry and artillery did not play an important role in the Civil War. The cavalry was not involved in any direct attack in the civil war. The cavalry was used to guard an army’s flanks, obtain supplies and cover retreats. The accuracy of rifle-fire meant that cavalry were no longer a major force on the battlefield. About 20 per cent of the confederate and 15 per cent of the Union troops were cavalry. At the beginning of the Civil War, the confederate cavalry was better than Union. This was because the good morale and good leaders like Jeb Stuart. However, by 1863, the Union cavalry was just as good as the confederate cavalry. Even though, there were not a lot of cavalry troops in both sides, it still gave out certain help like giving out supply. Moreover, the use of artillery did not play an important part in the Civil war as well. This was because the use of artillery could not be well used in the areas that took place in the Civil War. Moreover, riled-musket was more useful compare to the cannon. Furthermore, the north had better potential to produce more and better guns because of their strong industrial support. Moreover, the confederate manufactured some of its own gun, but it was not as good as the Unions. Overall, the use of cavalry and artillery did not have a significant role in the Civil War, but in fact it did affect both sides in some aspects.

Both sides show a significant change on their naval warfare. In April 1861, the Union only had 8800 men in the navy. They only had 90 ships and only few of them were in action. However, the confederate was even worst. They did not have any navy at all in 1861. As soon as the war started, the North sent the merchant marine to blockade the South. And the amount of the ships in December 1861 increased to 260 warships on duty and 100 more were under construction. Blockading the South gave huge advantages to the North. This was because the Confederate could sell cotton in Europe in order to manufacture more new technology. However, with the blockade, they could not trade with any other countries. So the South would not be able to get money and manufacture any goods. The number of ship that increased by North between April 1861 to December 1861 was enormous. The result was that the South could not rely on its trade with other countries and lead to poor economic. The Union had an enormous change on their naval warfare but the Confederate did not.

The military strategies and tactics of the armies of North and South did in fact have changed during the Civil War. Both sides did have changed on their offensive and defensive tactics, new weapons and communication. But on the other hand, both sides did not change on their cavalry and artillery. So it was hard to argue that both sides have enormous change in all aspects.