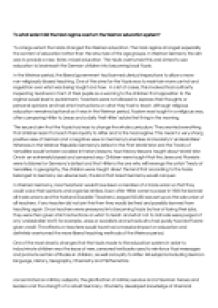 To what extent did the Nazi regime overturn the Weimar education system?

Transfer-Encoding: chunked ﻿To what extent did the Nazi regime overturn the Weimar education system? To a large extent the Nazis changed the Weimar education. The Nazi regime changed especially the content of education rather than the structure of the age groups. In Weimar Germany the aim was to provide a new, fairer, mixed education. The Nazis overturned this and aimed to use education to brainwash the German children into becoming loyal Nazis. In the Weimar period, the liberal government had banned clerical inspections to allow a more non-religiously biased teaching. One of the aims for the Nazis was to maintain more control and regulation over what was being taught and how. In a lot of cases, this involved Nazi authority inspecting teachers in front of their pupils as a warning to the children that opposition to the regime would lead to punishment, Teachers were not allowed to express their thoughts or personal opinions and had strict instructions on what they had to teach. ...read more.

Once teachers were pressured into becoming Nazis by fear of losing their jobs, they were then given strict instructions on what to teach and what not to. Schools were purged of any ?undesirable? staff, for example, Jews or socialists and schools who had purely Nazi staff were given credit. The effects on teachers would have had a massive impact on education and definitely overturned the more liberal teaching methods of the Weimar period. One of the most drastic changes that the Nazis made to the education system in order to indoctrinate children was the issue of new, censored textbooks used to reinforce Nazi messages and promote certain attitudes in children, as well as loyalty to Hitler. All subjects imcluding German language, History, Geography, Chemistry and Mathematics concentrated on military subjects, the glorification of military service and of German heroes and leaders and the strength of a rebuilt Germany. Chemistry developed knowledge of chemical warfare, explosives, etc., while Mathematics will help the young to understand artillery, calculations, ballistics. ...read more.

Whilst boys were taught about mechanics and weaponry, girls had domestic science lessons. Children were also taught eugenics and the importance of keeping the Aryan race pure. Older girls were told how to pick out a perfect spouse by his features. Finally something which overturned a child?s education in the Nazi period as it would not have done in the Weimar period was the Hitler Youth. A child would have had less time for school education because of the sessions they had to attend with the Hitler Youth. There was less time to do homework because they had to go to rallies and marches, it was prioritised. On top of this the leaders of the Hitler youth encouraged children to report if they heard their teachers saying anything which went against Nazi beliefs. In conclusion the Nazi regime almost completely overturned the Weimar education system. The idea of education changed to serve the purpose of brainwashing the young into becoming loyal Nazis. Textbooks were replaced with propaganda, teachers were unable to express opinions and the curriculum followed strict rules of censorship, glorification of Hitler and dedication to Germany. ...read more.