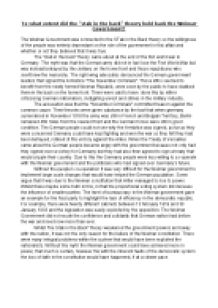 To what extent did 'the stab in the back' theory hold back the Weimar Government?

﻿To what extent did the ?stab in the back? theory hold back the Weimar Government? The Weimar Government was connected to the STab in the Back theory so the willingness of the people was entirely dependant on the role of the government in this affair and whether or not they believed that it was true. The ?stab in the back? theory came about at the end of the first world war in Germany. The myth was that the German army did not in fact lose the First World War but was instead betrayed by the civilians on the home front and those republicans who overthrew the monarchy. ...read more.

The German people could not see why the Armistice was signed, as far as they were concerned Germany could have kept fighting and won the war so they felt they had been betrayed, robbed of this victory against the Allies. When the Treaty of Versailles came about the German people became angry with the government because not only had they signed over a victory for Germany but they had also then agreed to sign a treaty that would cripple their country. Due to this the Germany people were less willing to co-operate with the Weimar government and the politicians who had signed over Germany?s future. Without the people?s co-operation it was very difficult for the Weimar government to implement large scale changes that would haev helped the German population. ...read more.

For example, there were twenty different cabinets between 13 february 1919 and 30 January 1933 and the legislation was easily exploited by the opposition. The Weimar Government did not exude the confidence and solidarity that German nation had before the war and need now more than ever. Whilst ?the Stab in the Back? theory weakened the government powers and sway with the nation, it was not the only reason for the failure of the Weimar constitution. There were many integral problems within the system that would have been exploited the nationalists. Without this myth the Weimar government could have achieved more in power, that much is certain, however the with the inherent faults of the democratic system the loss of faith in the constitution would have happened, if at a slower pace. ...read more.