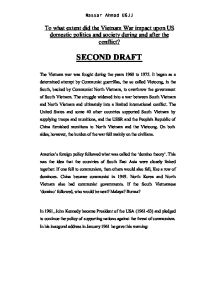 To what extent did the Vietnam War impact upon US domestic politics and society during and after the conflict?

To what extent did the Vietnam War impact upon US domestic politics and society during and after the conflict? SECOND DRAFT The Vietnam war was fought during the years 1960 to 1975. It began as a determined attempt by Communist guerrillas, the so called Vietcong, in the South, backed by Communist North Vietnam, to overthrow the government of South Vietnam. The struggle widened into a war between South Vietnam and North Vietnam and ultimately into a limited international conflict. The United States and some 40 other countries supported South Vietnam by supplying troops and munitions, and the USSR and the People's Republic of China furnished munitions to North Vietnam and the Vietcong. On both sides, however, the burden of the war fell mainly on the civilians. America's foreign policy followed what was called the 'domino theory'. This was the idea that the countries of South East Asia were closely linked together. If one fell to communism, then others would also fall, like a row of dominoes. China became communist in 1949. North Korea and North Vietnam also had communist governments. If the South Vietnamese 'domino' followed, who would be next? Malaya? Burma? In 1961, John Kennedy became President of the USA (1961-63) ...read more.

That is why once the US had become involved they did not pull out easily as the consequences would have been very severe. Then on 22 November 1963 a tragic event took place. President John F. Kennedy was shot and killed as he was riding in an open limousine through the streets of Dallas. His Deputy Lyndon B Johnson was sworn in as President, the same day. LBJ further increased the number of advisors and equipment being sent to Vietnam, he wanted to declare war and destroy North Vietnam and Communism as soon as possible, even if he had to sacrifice his plans for a 'Great Society.' 'Losing the Great Society was a terrible thought, but not so terrible as the thought of being responsible for America's losing a war to the Communists. Nothing could possibly be worse than that.' 3 This source clearly shows the sense of urgency LBJ had. At no point was he willing to back away from Vietnam, quite the contrary, he saw the US as the worlds policeman and an ambassador to Capitalism, that had a duty to wipe out Communism. This war was different from all other wars that had been fought, it was uncensored and nearly everything that took place in Vietnam was shown on US television, this had a profound effect on the American public. ...read more.

Once an American male turned 18 years of age, he was under federal order to register with Selective Service, which provided him with an identification card. Applying for the card made the local draft boards, composed of groups of civilians, aware of available young men. This led to further chaos for the government as many people dodged conscription by fleeing to neighbouring Canada or by simply burning their draft cards. Some burnt their cards in public, others just refused to report for training. Both were criminal offences and by the end of 1969 there were 34,000 draft-dodgers wanted by the police. 'My name is John Lacey. I was born in 1945 and brought up in New York. I left America in 1967 just after leaving college. I did this to avoid being drafted. I went to Canada and then to Sweden where I lived till there was an amnesty for the draft-dodgers which let me return to the USA' 6 1 Vietnam: Conflict and Change in Indochina by Alan Pollock 2 Vietnam 1939-75 by Neil Demarco. 3 President Lyndon B. Johnson. 4 Roger LaPorte, member of the Catholic Worker movement, quoted in wire-service story after setting himself on fire in front of the United Nations building, 1965. 5 Martin Luther King speaks out against the war. Vietnam 1939-75 by Neil Demarco. 6 J. Cannon et al., The Contemporary World, Conflict or Co-operation?, p.26 Nassar Ahmad U6JJ ...read more.