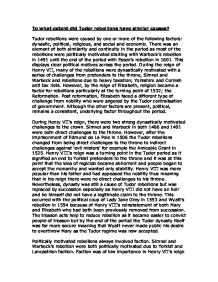 To what extent did Tudor rebellions have similar causes

To what extent did Tudor rebellions have similar causes? Tudor rebellions were caused by one or more of the following factors: dynastic, political, religious, and social and economic. There was an element of both similarity and continuity in the period as most of the rebellions were politically motivated starting with Warbeck's rebellion in 1491 until the end of the period with Essex's rebellion in 1601. This displays clear political motives across the period. During the reign of Henry VII, many of the rebellions were dynastically motivated with a series of challenges from pretenders to the throne, Simnel and Warbeck and rebellions due to heavy taxation; Yorkshire and Cornish anti tax riots. However, by the reign of Elizabeth, religion became a factor for rebellions particularly at the turning point of 1532; the Reformation. Post reformation, Elizabeth faced a different type of challenge from nobility who were angered by the Tudor centralisation of government. Although the other factors are present, political, remains a consistent, underlying factor throughout the period. During Henry VII's reign, there were two strong dynastically motivated challenges to the crown. Simnel and Warbeck in both 1486 and 1491 were both direct challenges to the throne. However, after the imprisonment of Edmund de La Pole in 1506 the Tudor rebellions changed from being direct challenges to the throne to indirect challenges against 'evil misters' for example the Amicable Grant in 1525. ...read more.

The foreign policy of 1500- 25 meant that the nobility were appeased but the Amicable Grant of 1525 was a turning point because it was a change in crown policy and people resented the taxation. Another turning point was in 1568 with the arrival of Mary Queen of Scots as she provided a figure head for rebellion;. The rebellion of the Northern Earls was the last major rebellion from the north as people came to accept Tudor centralisation. Ket's rebellion was the only rebellion that did not involve faction as they spoke of Somerset being 'the good duke' but this is not representative of the period as a whole. Faction became more narrowly focused as the period went from being wide (The Yorkist vs. Lancastrians) to personal grievances in Elizabeth's reign. Religion, unlike faction was not consistently present throughout the Tudor reign. It was only due to the reformation in 1532 that religion became a factor that linked the previously disparate groups together. During Henry Tudor's reign there was never a problem with religion as a cause for rebellion, the Pilgrimage of Grace in 1536 and the Western Rebellion meant that there was a period of time where the church were losing authority and were no longer able to keep order. The rebels in both rebellions marched under the banner of the five wounds of Christ, showing that they marched under God's judgement; a ...read more.

After Ket's rebellion enclosure was no longer a main cause of rebellion as the gentry were now more concerned with the centralisation of Tudor government. This is because the reformation led to an increased resentment and a widened social gap between the commons and the gentry, as the gentry proceeded to profit from the dissolution of monasteries. The natural ties between the commons and the gentry were beginning to disappear which meant that rebellions with socio economic grievances as their main cause saw a decline. The gentry soon found that the commons were now less willing to fight for them or to support them in their rebellions. There was now a widening social gap that created tension as the gentry attempted to emulate the nobility. As although the Cloth trade in Kent was declining in 1554 Wyatt's rebellion had no real socio - economic cause and the Northern Earls in 1569 and Essex in 1601 had no socio -economic causes whatsoever. Overall, political causes were a constant factor throughout the period, and although socio-economic causes were always present, by the end of the Tudor dynasty they began to decline. Both religion and dynasty both had periods of time when they took precedence in rebellions and were of particular importance. But it is throughout the reigns of both Henry VIII and Elizabeth, when faction became more narrowly focused, that political causes are at their most constant and similar. ...read more.