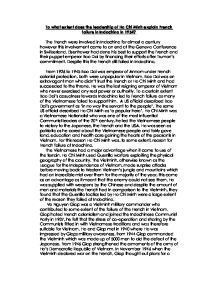 To what extent does the leadership of Ho Chi Minh explain French failure in Indochina in 1954?

To what extent does the leadership of Ho Chi Minh explain French failure in Indochina in 1954?

The French were involved in Indochina for almost a century however this involvement came to an end at the Geneva Conference in Switzerland. Eisenhower had done his best to support the French and their puppet emperor Bao Dai by financing their efforts after Truman’s commitment. Despite this the French still failed in Indochina.

From 1926 to 1945 Bao Dai was emperor of Annam under French colonial protection, both were unpopular in Vietnam. Bao Dai was an extravagant man who didn’t trust the French or Ho Chi Minh and had succeeded to the throne. He was the last reigning emperor of Vietnam who never exercised any real power or authority. To a certain extent Bao Dai’s casualness towards Indochina led to French failure as many of the Vietnamese failed to support him.  A US official described Bao Dai’s government as ‘in no way the servant to the people’. The same US official described Ho Chi Minh as ‘a popular hero’. Ho Chi Minh was a Vietnamese Nationalist who was one of the most influential Communist leaders of the 20th century, he led the Vietnamese people to victory to the Japanese, the French and the USA. Ho was seen as patriotic as he cared about the Vietnamese people and fairly gave land, education and health care gaining the hearts of the peasants in Vietnam. For this reason Ho Chi Minh was, to some extent, reason for French failure at Indochina.

The Vietnamese had a major advantage when it came to use of the terrain. Ho Chi Minh used Guerrilla warfare exploiting the physical geography of the country. The Vietminh, otherwise known as the League for the Independence of Vietnam, made surprise attacks before moving back to Western Vietnam’s jungle and mountains which had an incredible mist over them for the majority of the year, this came as an advantage as it meant that the enemy could not see them. Ho was supplied with weapons by the Chinese and despite the amount of men and materials the French had in comparison to the Vietminh, they found that the Guerrilla tactics led by Ho Chi Minh were a large extent of the reason they failed at Indochina.

Vo Nguyen Giap was a Vietminh military commander who contributed to some extent of the failure of the French in Vietnam. Giap hated French colonialism and joined the Indochinese Communist Party in 1937, he felt that the stress of co-operation and sharing by the Communists fitted in with Vietnamese traditions and was therefore suitable for Vietnam. Ho and Giap met in 1940 where Ho was impressed by Giaps military awareness, from 1944 Giap commanded the Vietminh which was made up of 5000 men to aid the defeat of the Japanese. From 1946 Giap strengthened the armaments of the army of Ho’s Democratic Republic of Vietnam. In November 1946 when the Vietminh declared war on the French, Giap thought out plans for a revolutionary war and improved the training the Vietminh were given. Giap started with Guerrilla warfare to weaken the French, he then gradually moved on to battles as the Vietminh strengthened. By 1952 Giap commanded quarter of a million soldiers and a private army of almost two million soldiers. Each division was backed up by 40,000 porters, mainly women, who carried rice and weaponry through the jungle and mountains. His methods of warfare led to the defeat of the French to an extent.

Giap’s soldiers followed rules on how to treat the civilians as to win the hearts and minds of the people.

Mao Zedong, the Chinese Communist leader gave General Giap and Ho Chi Minh diplomatic recognition meaning that China and the Vietminh had a relation between them. He gave them more weaponry, advice, and refuge in China if the soldiers of the Vietminh were in trouble. This aid given by the Chinese was quite a big extent towards the failure of the French.

Giap’s determination to defeat the French was a great extent of the French failure at Indochina, he trained his army well and inspired many of the soldiers.

The French army tried ‘yellowing’ which meant signing up native Vietnamese however the French didn’t trust them and so gave them little responsibility. In France many were starting to lose heart and interest in Indochina which was important in the military effort at Dienbienphu, which was situated in a valley in North Vietnam. The French held Dienbienphu and built a fortress in the hope of a set piece battle with the Vietminh. However the French underestimated the Vietminh. Thousands of Vietnamese peasants took apart heavy long-range guns and took the parts up the hills surrounding the valley and camouflaged the guns. From here Giap’s forces fired at the fortress whilst the French struggled. French overconfidence and Vietnamese skill contributed by a large extent to the failure of the French in Indochina.

There are many reasons why the French failed at Indochina in 1954. Ho Chi Minhs leadership led to the fail to some extent however other factors such as the unpopularity of the emperor Bao Dai, Vietnamese knowledge of the terrain, and Chinese aid also contributed to a large extent. Therefore Ho Chi Minh played a small part in the defeat of France in Indochina in 1954.