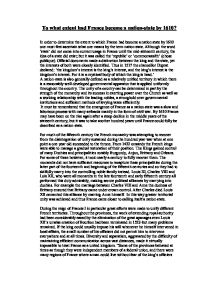 To what extent had Francebecome a nation-state by 1610?

To what extent had France become a nation-state by 1610? In order to determine the extent to which France had become a nation state by 1610 one must first ascertain what one means by the term nation state. Although the word 'state' did not come into current usage in France until the mid-sixteenth century, the idea of a state did exist; but it was called the 'republic' or 'commonwealth' (chose publique). Official documents made a distinction between the king and the state, yet the interests of both were closely identified. Thus in 1517 the chancellor Duprat declared: 'the kingdom's interest is the king's interest, and the king's interest is the kingdom's interest. For it is a mystical body of which the king is head.' A nation-state is also generally defined as a relatively unified territory in which there is a reasonably well developed governmental apparatus that is applied uniformly throughout the country. The unity of a country can be determined in part by the strength of the monarchy and its success in exerting power over the Church as well as a working relationship with the leading nobles, a stronghold over governmental institutions and sufficient methods of levying taxes efficiently. ...read more.

The royal court was complicit in this and the blame naturally fell on Catherine and Charles. This caused a great schism in a country which had previously made tentative movements towards unity. The ensuing problems reversed in its entirety the process of becoming a nation-state. In the aftermath of the massacre Huguenot communities formed their own governments and so effectively became 'states within a state.' Even at a local level communities were tearing each other apart. However not only was the country fractured but also the governmental apparatus was in disrepair as illustrated by the weak and ineffectual reign of Henry III. Henry III was unable to wield any successful power and lost control of the capital which was largely under the command of Henry, Duke of Guise, head of the Catholic League. This situation was not to be overturned until the end of the sixteenth century when Henry IV came to the throne in 1589. Henry III was an astute, political figure who realised that the crown's power would be seriously lacking until Paris was fully under the control of the king. France could in no way be described as a nation-state when Paris was being ruled independently from the rest of France. ...read more.

Sully reformed the method of tax collecting by bringing in tax collectors to ensure that all taxes were collected. He also reduced the taille which was the general tax on population which meant that poor people had a more disposable income and introduced a tax on office-holders, the paulette, which brought in two million livres per year. Sully spent prodigiously on building roads, canals and bridges which aided greatly in the territorial unification of the country. By 1610 France was well on its way to fully becoming a nation-state although it had met many setbacks on the way. Great steps had been taken in the early part of the sixteenth century towards increased territorial unification in the form of many principalities restoration to the crown. An effort was also made to unify the government and legal institutions in the Ordinance of Blais in 1499 although this was not to be completely established until the reign of Francis I. However there was a large hiatus in the mid sixteenth century due to prolonged in-fighting between nobles in the Wars of Religion and the subsequent succession of several minors to the French throne. It was not until the accession of Henry IV in 1589 that these catastrophic changes could be reversed with many reforms that brought France ever closer to being a nation state. ...read more.