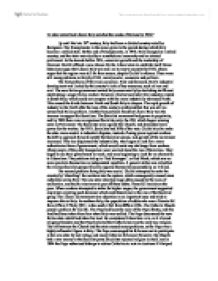 Up until the late 19th century, Italy had been a divided country ruled by foreigners. The Risorgimento is the name given to the period during which Italy became a unified state. By the end of Risorgimento, in 1970, Italy emerged as a united country, and the state was ruled by a constitutional monarchy and an elected parliament. In the decade before 1914, economic growth and the leadership of Giovanni Giolitti offered a new chance for the Liberal state to establish itself. Some historians argue that Liberal Italy was well on its way to security by 1914, others argue that the regime was still far from secure, despite Giolitti’s reforms. There were still many problems in Italy by 1914, mainly social, economic and political.

The first problem of Italy was economic. First and foremost, Italy’s industrial development was limited by the country’s lack of key resources, such as iron and coal. The new Italian government united Italy economically by abolishing tariffs and establishing a single Italian market. However, this harmed what little industry existed in South Italy, which could not compete with the more industrially advanced North. This caused the divide between North and South Italy to deepen. The rapid growth of industry in the North after the turn of the century reinforced that this was still an unresolved Italian problem. Another key problem faced by Liberal Italy was the increase in support for Socialism. The Socialist movement had grown in popularity, and by 1900 there was an organised Socialist party, the PSI, which began winning seats in Parliament. The Socialists were against the Church, and demanded more power for the worker. By 1913, Socialists had 20% of the vote. Giolitti tried to make the state more neutral in industrial disputes, instead of using power against workers. Its shift in approach failed to satisfy the Socialist unions, and growth of the movement increased. This also displeased the industrialists, who began to look for a more authoritarian form of government, which would resist any challenge from workers. Many people of the petty bourgeoisie were worried about the rise of Socialism. They began to see their government as weak, and were beginning to look for an alternative to Liberalism. The problems led up to ‘Red Romagna’, or Red Week, which saw eo areas proclaim themselves as independent republics. A general strike was called but the various Socialist groups failed to organise themselves successfully, so it failed.

The second problem facing Italy was social. Giolitti attempted to unite the country by ‘absorbing’ the workers into the system, which consequently caused mass outbreaks across Italy. The new state inherited large debts caused by the wars of unification, and had to raise taxes to pay off these debts. These fell mainly on the poor. When workers attempted to strike for higher wages, the government supported employers rejecting such demand, which contributed also to the rise of the Socialist group. The Liberal Government saw education as an important issue and tried to improve this in Italy. In northern Italy, the population of adults who were illiterate fell from 42% to 11% by 1911, in the south it fell from 88% to 65%. The Catholic Church posed a problem for Giolitti. The Pope had been the ruler of the Papal States, and this land had been taken from him when Italy was unified. The Pope denounced the new Italian state which had taken his land. He considered Liberalism a sin, as it allowed religious freedom and the Pope believed that Catholicism was the only true religion. The rift between the Church and the state caused many problems, as the Pope was a highly influential figure in Italy. The Pope encouraged his followers not to participate in the new state by not voting, and many Catholics followed. However, the Church had a new enemy in the Socialist party. Socialists rejected religion in itself, and in 1904 the Pope authorised bishops to advise Catholics to vote in elections if it helped to defeat the Socialists. In an attempt to get Italians to recognise with the state, Giolitti passed laws to assist them. His attempts at social reform were undermined by his methods of trasformismo – of traditional corrupt politicians. He attempted to stay in office by gaining support from a variety of political group, but he appeared to be just another schemer and became known as the ‘master of the underworld’.

The third problem in Italy was political. Risorgimento resulted in a unified Italy, but the country still had many divisions. Giolitti’s aim of bringing together groups did not work in practise. In trying to win over one group of people, he alienated another. In trying to win over moderate Catholics and Socialists to the Liberal system, he succeeded only in upsetting some Liberals who feared an increase in the influence of the Church or workers. As an attempt to win support of key groups, Giolitti used foreign expansion to try to achieve this. He caved in to nationalist pressure, and attacked Libya in 1911, which was then ruled by Turkey. The Italians managed to defeat Turkey, who was knows as the ‘sick man of Europe’. However, many Italians resented the war. They were conscripted to fight for something they did not understand, and were rewarded for their effors with increased taxation. The victory did reduce criticism from the nationalist right-wing, but it strengthened the radical socialist criticism of Giolitti. Liberal Italy had promised people a say in the way things were run in the country. This did not happen. Liberal politicians believed in having Parliament, but only the wealthy educate elite could participate. Initially very few people had the right to vote, though this was increased to most males in 1912. Political parties did not really reflect popular wishes, and were not representative of the people of Italy. Corruption was common in local governments, and bribery and inefficiency were widespread within the administration. This served to discredit the Liberalist government further in the eyes of the Italians. There was a gulf between ‘legal Italy’ and ‘real Italy’, and the majority of Italians knew little of what went on beyond their villages. For them Italy was just a power which forced them to pay taxes and do military service, and not their country.

In conclusion, I think that Liberal Italy had not satisfied the needs of Italians by 1914. Despite Giolitti’s reforms, Italy saw the worst outbreak of mass unrest in 1914 since 1898.  There were demonstrations, and Red Week occurred because the masses were dissatisfied with the rule of the Liberals. Liberal Italy had not satisfied key groups, which showed in the failures of the government to unite the country and the people.