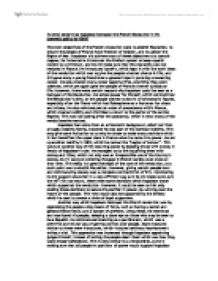 To what extent had Napoleon betrayed the French Revolution in his domestic policy by 1804? The main objectives of the French revolution were to abolish Feudalism, to ensure the people of France have freedom of religion, and to uphold the Rights of Man. Napoleon did achieve most of these objectives to a certain degree, for instance he introduced the Prefect system to keep royalist revolts to a minimum, and he did make sure that the monarchy was not restored in France. He introduced lyce�'s, which kept in with the main ideas of the revolution which was to give the people a better chance in life, and this gave many a young Frenchmen a greater hope in pursuing a rewarding career. He also created many career opportunities, providing they were talented, which yet again gave the people of France a better outlook on life. However, there were certain reasons why Napoleon could be seen as a betrayer of the Revolution. He seized power for himself, which contradicted the Revolution's aims, as the people wanted to be rid of aristocratic figures, especially after the Terror which had Robespierre as a frontman for chaos and misery. ...read more.

He reintroduced branding as a punishment, which was a primitive and brutal way of gaining control over people. More measures similar to these were introduced, which included arbitrary imprisonment without trial. This oppression was increased through Napoleon appointing judges himself, instead of letting the people elect them which was how they were chosen beforehand. This is very similar to a dictatorship, as he is making sure that all people in positions of power would support Napoleon and his decisions. This contradicts the ideas behind the revolution, which was mainly to give more power to the people of France. Instead, power was taken away from the people of France. However, he did use this power to make sure that there was no chance of a Royalist takeover, by keeping them under house arrest and making sure that he kept tabs on those who the Revolution fought to be rid of. But by sacrificing liberty, he was not adhering to the main ideas behind the revolution, despite whether he wanted to turn France into a superpower. One of the most famous actions of Napoleon which was remembered throughout history was the Civil Code of 1804, otherwise known as the Napoleonic Code. ...read more.

Overall, the media was all in Napoleon's grasp, which was misleading the people too. This betrayed the freedom aspect of the revolution, and was just another means of making sure that people weren't even thinking about plotting against him. This was no way what the revolution wanted to achieve, and he was blatantly defying those who had fought for the revolution. Napoleon himself seemed unsure of wether he wanted to fight for the revolution or against it. Many quotes that historians have from Napoleon contradict each other, such as that his aim was to change the revolution - "The Revolution has ended." However other quotes that historians have, such as "I am the son of the French Revolution" contradict that. From this we can assume he rode the French Revolution to power, instead of truly believing in the causes of the Revolution. He betrayed the revolution in far more ways than he supported it, and he cleverly used it to his advantage just to become another dictator within France. He did certainly modernise a lot of France with the Ecucation such as the lyce�'s which no other country had, and the Police forces. But this eventually was for his gain, to make sure he kept power within his grasp. ...read more.