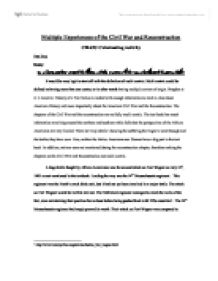 To what extent is Nation narrative on the Civil War and Reconstruction multi-centric?

The 54th Massachusetts regiment had amply proved its worth. Their attack on Fort Wagner was compared to Bunker Hill by one northern newspaper2. Another battle not mentioned in the chapter is the massacre was Fort Pillow, where several dozen black soldiers were killed after they had already surrendered3. Again, as not being mentioned in the text book, women had disguised themselves as men to arm themselves and fight in the war. It is an accepted fact that the Civil War was a man's fight. Images of women during that civil war center on self-sacrificing nurses, romantic spies, or brave ladies upholding the home front in the absence of their men4. Both the Union and Confederate armies had forbidden the recruitment of women5. ...read more.