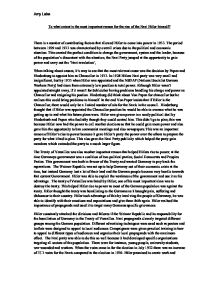 To what extent is the most important reason for the rise of the Nazis Hitler himself?

To what extent is the most important reason for the rise of the n**i Hitler himself? There is a number of contributing factors that allowed Hitler to come into power in 1933. The period between 1929 and 1933 was characterised by overall crises due to the political and economic situation. This created the perfect condition to change the government, system and the leader, because of the population's discontent with the situation, the n**i Party jumped at the opportunity to gain power and carry out the 'n**i revolution', When talking about causes, it's easy to see that the most relevant cause was the decision by Papen and Hindenburg to appoint him as Chancellor in 1933. In 1928 Hitlers n**i party was very small and insignificant, but by 1933 when Hitler was appointed and the NSDAP (National Socialist German Workers Party) had risen from extremely low position to total power. Although Hitler wasn't appointed straight away, if it wasn't for Schleicher having problems handling his charge and power as Chancellor and resigning his postion. ...read more.

Hitler was able to exploit the weakness of the government and use it as his advantage. The treaty of Versailles was hated by Hitler; one of his most important aims was to destroy the treaty. This helped Hitler rise to power as most of the German population was against the treaty. Hitler thought the treaty was humiliating to the Germans as it brought pain, suffering and dishonour to their country. Hitler took advantage of this by involving the people of Germany, he was able to identify with their emotions and expectations and give them faith again. Hitler realised the importance of propaganda and used it to target many Germans specific grievances. Hitler constantly attacked the divisions and failures if the Weimar Republic and its responsibility for the humiliation of Germany in the Treaty of Versailles. n**i propaganda cleverly targeted different groups among the German population. Different advertising techniques were used such as posters and leaflets were designed to appeal to local audiences. ...read more.

The number of unemployed people rose and created poverty. This made the population angry with the Weimar Government, which resulted in people losing confidence in the democratic system and turned towards the extremist political parties such as the Communists and the Nazis In this crisis people wanted someone to blame and Hitler pointed the finger at the weakened German democracy and this was to open the door to the rise of Hitler and the n**i party All these reasons are all inter-dependant on each other, without the Treaty of Versailles there wouldn't have been rebellions and Hitler wouldn't have changed his tactics. This would follow onto Hitler not trying to get elected and Hitler probably wouldn't have been elected if it wasn't for the German depression in 1929 either. . Hitler wouldn't have been able to get the majority of the party to pass the enabling law which wouldn't of been able to decease the Weimar Government and become the fuher of Germany.The German population wanted to be saved and for these issues to be resolved and Hitler was the man to do it ?? ?? ?? ?? Amy Lake ...read more.