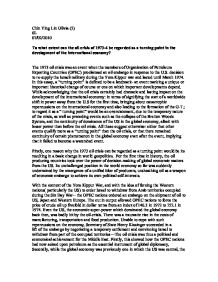 To what extent is the oil crisis of 1973 a turning point in postwar economic development?

Chin Ying Lin Olivia (2) 6L 07/02/2010 To what extent can the oil crisis of 1973-4 be regarded as a turning point in the development of the international economy? The 1973 oil crisis was an event when the members of Organization of Petroleum Exporting Countries (OPEC) proclaimed an oil embargo in response to the U.S. decision to re-supply the Israeli military during the Yom Kippur war and lasted until March 1974. In this essay, a "turning point" is defined to be a landmark- an event marking a unique or important historical change of course or one on which important developments depend. While acknowledging that the oil crisis certainly had dramatic and lasting impact on the development of the international economy: in terms of signifying the start of a worldwide shift in power away from the U.S for the first time, bringing about catastrophic repercussions on the international economy and also leading to the formation of the G-7 ; to regard it as a " turning point" would be an overstatement, due to the temporary nature of the crisis, as well as preceding events such as the collapse of the Bretton Woods System, and the continuity of dominance of the US in the global economy, albeit with lesser power than before the oil crisis. ...read more.

The Bretton Woods system was established in 1944 aimed at containing the contradictions of the world economy and preventing the development of socialist revolution; and was ever since the central foundation of the post-war international financial system. However, with the decline of US hegemony and increasing dissatisfaction with the privileged role of the U.S. dollar as the international currency, along with the weakening state of the dollar, the system was becoming almost impossible to maintain. Throughout the 1950s the US was still able to sustain a balance of payments deficit to finance loans, aid, and troops for allied regimes. However, during the 1960s, the costs of doing so became less tolerable. By the 1970s, the U.S. alarmingly held under 16% of international reserves. Adjustment to these changed realities was impeded by the U.S. commitment to fixed exchange rates and by the U.S. obligation to convert dollars into gold on demand. With increasing tolls on the Bretton Woods system, it finally collapsed after a last-gasp devaluation of the dollar to $44/ounce, and reopened in March in a floating currency regime. Its demise was thus a major turning point, one much crucial and significant than the 1973 oil crisis in the global economic development; as it inaugurated a new stage characterized by the development of globalized production and the domination of an international financial market- a watershed from the previous system that was pegged to the gold standard, and US-dominated. ...read more.

This is an extremely impressive response with excellent knowledge, detail and analysis. The author achieves good balance and reaches a conclusion but this could be more developed.