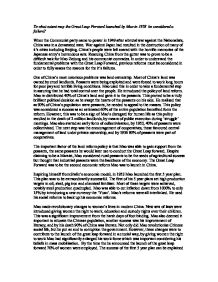 To what extent may the Great Leap Forward launched by Mao in 1958 be considered a failure?

To what extent may the Great Leap Forward launched by Mao in 1958 be considered a failure? When the Communist party came to power in 1949 after a brutal war against the Nationalists, China was in a devastated state. War against Japan had resulted in the destruction of many of it's cities including Beijing. China's people were left scared with the horrific memories of the Japanese army's horrendous acts. Rescuing China from the gutter was to prove to be a difficult task for Mao Zedong and his communist comrades. In order to understand the fundamental problems with the Great Leap Forward, previous reforms must be considered in order to fully assess the reasons for the it's failures. One of China's most notorious problems was land ownership. Most of China's land was owned by cruel landlords. Peasants were being exploited and were forced to work long hours for poor pay and terrible living conditions. Mao used this in order to take a fundamental step in assuring that he had total control over the people. He introduced the policy of land reform. Mao re-distributed 40% of China's land and gave it to the peasants. This proved to be a truly brilliant political decision as he swept the hearts of the peasants on his side. He realised that as 90% of China's population were peasants, he needed to appeal to the masses. This policy was considered a success as an estimated 60% of the entire population benefited form the reform. ...read more.

By the time the he announced the launch of the great leap forward 70% of women were employed. The success of the first 5 year plan can be explained by several factors. The targets set were plausible and most importantly Mao had the help of Russian economic and agricultural experts. However Mao deeply mistrusted experts. Some may argue that this was one of the main reasons for launching the hundred flowers campaign. In order to lure out intellectuals and opposition Mao gave a speech in 1957. During this speech Mao encouraged the intelligentsia to 'constructively' criticize the communist party. At first the movement was slow to take of but once Mao forced the media to get behind it, people started speaking their minds about Mao's regime. Communist party members were being heavily criticized and the Chinese people demanded reform. Mao, not uncharacteristically decided to reverse the policy in May 1957. This was to result in a crackdown on the intelligentsia known as the 'anti rightist campaign'. Over 300,000 people were sent to labour camps. The hundred flowers was not simply a way at removing the intelligentsia, it was a way of removing Mao's opponents, and this was to make the launch of the Great leap forward less difficult and certainly less questioned for the few experts that remained would be too terrified of speaking against the communist party chairman. ...read more.

According to Jung Chang and Jon Halliday "Mao aim was to dehumanise China's 550 million peasants and turn them into the human equivalent of draft animals" Mao had betrayed the peasants and was going to trade the peasant's life for economic growth. Mao expected far too much from these communes. This may explain why the harvest predictions were astronomically high. Mao would have done well to examine the previous harvesting results. The normal yield was a ton per acre. The previous harvest of 1957 yielded a poor 195 million tons of grain. In 1958 Mao announced that the harvest figures for that year had been 430 million tons, western experts place this figure around 200 million tons. This demonstrates how much the production figures were exaggerated. Mao 's political secretary Chen Boda told Mao that China was accomplishing in a day what it took capitalist states 20 years to accomplish. Production actually decreased during the Great Leap Forward by significant amounts, the harvest of 1959 was yielded a disappointing 170 million tons the CCP reported it at 282 million tons. This figure was to get even lower in 1960 when it fell to 143 million tons. This can be attributed to poor agricultural techniques. Close planting and deep ploughing were considered to be at the hear t of agricultural success. During these years Mao was asked how he intended to pay for his newly ordered soviet heavy machinery. Mao answered by claiming that "China has unlimited food supplies". Consequently China increased its food exports towards Russia. ...read more.