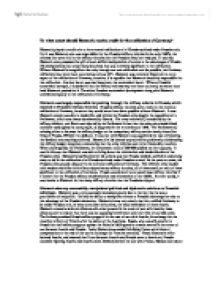 To what extent should Bismarck receive credit for the unification of Germany?

Russia was hostile to France; Britain was insulted by French intentions of annexing Belgium, a piece of information that Bismarck revealed at a crucial time. The leniency of The Treaty Of Prague had caused Austria to remain on good terms with Prussia and Italian friendship had been bought with Venetia in 1866. The war with France arose from Bismarck's careful manipulation of the Hohenzollen Candidature. By simply editing the telegram, the Ems telegram, from the Prussian king to the French regarding the Hohenzollen Candidature, Bismarck was able to make it sound as if the King had insulted the French. Once Bismarck had publicly released it the French declared war. Bismarck brilliant manipulative skills were essential to the unification of a Kliendeutschland for they often brought about events that were absolutely crucial to the eventual unification. It was Bismarck who realized the need for war to successfully unite Germany under Prussian control. Bismarck knew that the way to unify Germany was through 'iron and blood' not through 'speeches and majority decisions' as happened in 1848. Three wars took place before the unification of Germany in 1871 that were of great significance to a German unification under Prussia's rule. Each of these wars were cleverly crafted and executed by Bismarck. They were always quick and effective, Prussia would always appear to be the victim, the innocent party, and the outcome was always the same: Prussia was always the victor. ...read more.

Prussia, as the leader of the Zollverein took this advantage to design the railway networks with a view of their military needs. The effect of the railway system can be seen in the three wars leading up to Germany's unification. The speed and efficiency in which the Prussian army could be moved around was very important to the eventual unification. Therefore the success of the Zollverein under Prussia's leadership did not only provoke future political unity it also allowed Prussia's economy to increase dramatically. This impacted on the way Prussia fought wars, gradually the bayonets and swords were replaced my missiles and needle guns. Prussia's economical strength has made Prussia ready to fight the new breed of industrial wars, giving her a clear advantage over the other German states. Hence with this new artillery, Prussia was almost guaranteed victory in the wars significant to the eventual unification of Germany. Bismarck's contribution was a major factor in German unification. Though the Prussian economic development enabled the build up of its military power and increased its influence amongst the German states. It only made unification under Prussian leadership possible, what made it certain was Bismarck's various roles. The significance of Bismarck's roles is that Bismarck was the one who was able to break down the barriers, create the opportunities by manipulating events to his advantage and seize these opportunities. By doing so, Bismarck turned what was merely a possibility into reality; he was able to declare the unification of a Kliendeutschland under Prussian rule. ...read more.