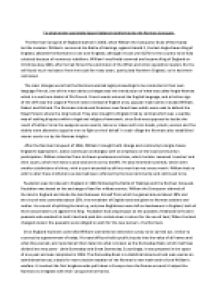 To what extent was Anglo Saxon England transformed by the Norman Conquest?

﻿To what extent was Anglo Saxon England transformed by the Norman Conquest. The Norman Conquest of England started in 1066, when William the Conqueror Duke of Normandy led the invasion. William?s success at the Battle of Hastings, against Harold II, the last Anglo-Saxon King of England, allowed the Normans to rule over England, although it took until 1071 for the country to be fully subdued because of numerous rebellions. William I was finally crowned and became King of England on Christmas day 1066, after he had forced the submission of the Witan and other opposition leaders. But he still faced much resistance from the locals for many years, particularly Northern England, so he had them restrained. The main changes were that the Normans wanted legal proceedings to be conducted in their own language French, one of the most obvious changes was the introduction of what was called Anglo-Norman which is a northern dialect of Old French. ...read more.

As a result of splitting the land up, only two Englishmen were left as landowners in England, both of them would later turn against the King. Feudalism had a big impact on the peasents, Medieval Serfs were peasants who worked his lord's land and paid him certain dues in return for the use of land, When the land changed owners the peasants were obliged to work for the new owners - the Normans. Once England had been controlled William warranted an extensive survey to be carried out, similar to a census by a government of today. His royal officers held a public inquiry into the value of all homes and what they owned, and recorded all their data into what is known as the Domesday Book, which itself was divided into two parts - Little Domesday and Great Domesday. Surprisingly, it was prepared in the space of one year and was completed in 1086. ...read more.

For example, women lost the right to consent to marriage as well as losing the right to remarry should they become widows. The Norman Conquest gradually influenced the legal position of women in England. The Norman kings distinguished between aristocrats and commoners, and the Normans in general brought changes in opportunities. Widows could remarry and, in general, control property in ways that married women and maidens could not. The greatest rights were generally available to women having access to land. Overall, the Norman Conquest did change Anglo-Saxon England to a large extent. They introduced the idea of feudalism which created a strong link between the King, his chiefts in tennants and the people within the Norman soicety. They also introduced the Domesday Book which created more order throughout the country. Despite all the changes, there are factors which have stayed the same throughout the Norman invasion. The use of hundred and shires remianed the same although they had different names aswell as the use of shire courts. ...read more.