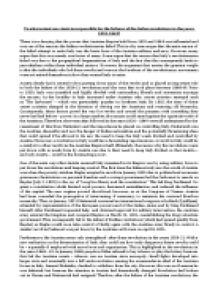 To what extent was Austria responsible for the failures of the Italian revolutions in the years 1820-1849?

﻿To what extent was Austria responsible for the failures of the Italian revolutions in the years 1820-1849? There is no denying that the power that Austrian Empire held from 1820 and 1848 was influential and was one of the reasons the Italian revolutionaries failed. This is why some argue that the main reason of the failed attempt to unite Italy was the brute force of the Austrian military and navy. However, many argue that this was merely one factor of many. Some argue that the reason that Italy?s revolutionaries failed was due to the geographical fragmentation of Italy and the fact that this consequently leads to parochialism within these individual sectors. However, the argument that carries the greatest weight is that the individuals who led these revolts and were at the forefront of the revolutionary movements were not united themselves in how they wanted Italy to unite. Austria clearly had a central role in putting down many of the revolts and so played an important role in both the failure of the 1820-21 revolutions and the ones that took place between 1848-49. Prior to 1820, Italy was unsettled and highly divided with nationalists, liberals and extremists amongst the masses. ...read more.

Thus, in January 1821 Metternich convened an international congress at Laibach (Ljubljana) attended by representatives of the European powers and of the Italian states and by King Ferdinand himself. After Rerdinand requested help and obtained approval for military intervention, the Austrian army entered the kingdom and occupied Naples on March 23, 1821, reestablishing the king's absolute government. This, consequently led to the defeat of Sicilian revolutions (which had spread quickly from Naples) as Naples could soon take control of Siciliy again with the Austrian army firmly in control. A similar revolt in Piedmont was put down by the Austrians at Novara on April 8, 1821. Furthermore, the Austrian army only strengthend after these revolutions in the years 1820-21. With a new realisation as the determination of Italy, they could see how truly dangerous future revolts could be ? especially if employed with more force and organisation. This is highlighted in the revolutions in the years 1848 ? 49. In January 1848, people in Milan refused to buy tobacco or play the lottery because this fed the Austrian assets ? tabacco was an Austian state monopoly. Small fights developed into larger riots and eventually into a full scale revolution causing the commander-in-chief of the Austrian forces in Italy, General Radetzky, decided to withdraw from the city. ...read more.

In fact, Italy was so separate that within these divided states there was a major conflict that would eb incredibly detrimental to Italy?s fight to unification. Some states (such as Tuscany and parma) had progressive restoration governments that modernised educations and the way the country was being governed, wheras other states (Piedmont, Moderna, Papal States and Naples) rules in a reactionary way. Moreover, each state had their own leader with their own views such as moderna which ,thanks to it?s leader hasburg Duke Franncis IV, was confined to the small ducy of Moderna. Moderna was isolated as it?s leader hated liberals and had problems with Austria too ? a clear example of how the states were utterly fragmented. The eventual result of this, is political and visionary fragmentation too; the citizens of Italy would feel more likely feel parochialism rather than Nationalism. Their loyalties would lie with their own towns and culture even rather than their own state, let alone Italy as a whole. Therefore, Italian nationalism was not the main priority for the revolutionaries; the revolts were most likely driven by the want of independence for their own state and a voice in their own government. For instance, neither in the reolutions between 1820-21 or 1848-49 did the states join in their outrage of the Austrians oppressive rule. The only occasion where this could have occurred was when Milan asked for Piedmont?s help. ...read more.