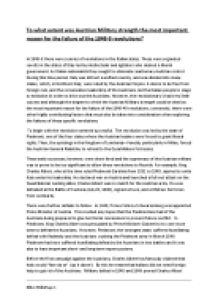 To what extent was Austrian Military strength the most important reason for the failure of the 1848-9 revolutions?

﻿To what extent was Austrian Military strength the most important reason for the failure of the 1848-9 revolutions? In 1848-9 there were a series of revolutions in the Italian states. These were organized revolts in the states of Italy led by intellectuals and agitators who desired a liberal government. As Italian nationalists they sought to eliminate reactionary Austrian control. During this time period, Italy was still not a unified country, and was divided into many states, which, in Northern Italy, were ruled by the Austrian Empire. A desire to be free from foreign rule, and the conservative leadership of the Austrians, led the Italian people to stage a revolution in order to drive out the Austrians. However, the revolutionary?s had very little success and although the degree to which the Austrian Military strength could be sited as the most important reason for the failure of the 1848-49 revolutions, conversely, there were other highly contributing factors that must also be taken into consideration when exploring the failures of these specific revolutions. To begin with the revolution seemed successful. The revolution was led by the state of Piedmont, one of the four states where the Austrian leaders were forced to grant liberal rights. ...read more.

Piedmont had now suffered humiliating defeat by the Austrians in two battles and it was also to have important short- and long-term repercucssions. Before the first campaign against the Austrians, Charles Albert has famously claimed that Italy would ?fare da se? (?go it alone?). By this he meant that Italians did not need foreign help to get rid of the Austrians. Military defeat in 1848 and 1849 proved Charles Albert wrong. The strength of the Austrian Military had been too much for Italy and the revolution but it is reasonable to say that some consideration must also be given to other drawbacks that Italy suffered from, namely, a lack of international allies, a lack of unity and a lack of popular support together with the Popes actions and poor leadership/organisation skills. To defeat the Austrian Military, Italians would need help from foreign allies to counter-balance the might of Austria but the Pope?s influence on the Catholic powers of Europe was counter-revolutionary. France, who was traditionally Austria?s enemy might have at one stage been considered an ally, but France chose military action against Italian nationalists, crushing the Roman Republic and therefore giving little optimism to those in the nationalist camps. ...read more.

In conclusion Austria?s military supremacy was probably the single most important factor in the failure of the revolutions. This was due to the Austrian army being superior in numbers, better equipped and much better lead than any other army in the Peninsula. In any conflict Austria were bound to win, even if the revolutionary forces had been able to present a united front, which they did not. By the middle of 1849 it was clear that the revolutions had failed, just as they had in 1820 and 1831, Lombardy and the Venetian Republic came under tighter Austrian control and worst of all, the strongest state, Piedmont had suffered humiliating defeat by the Austrian in two battles during 1848. Despite, ?Italy? , as in earlier revolutions suffering from major setbacks such as lack of unity, lack of popular support and a lack of international allies, I consider and have taken into account that the Austrian Military strength played an even more significant vital role in the failure of the 1848-9 revolutions. Austria remained dominant in a divided Italy and the Revolution was lost. Austria then went on to take the leading role in restoring the old regimes in 1849. ________________ Elliot MillsPage ...read more.