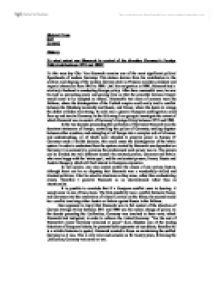 To what extent was Bismarck in control of the direction Germany's Foreign Policy took between 1871 and 1890?

Richard Cross 6U4 31/10/02 History: To what extent was Bismarck in control of the direction Germany's Foreign Policy took between 1871 and 1890? To this very day Otto Von Bismarck remains one of the most significant political figureheads of modern Germany. This stature derives from his contribution to the creation and shaping of the modern German state as Prussian minister president and imperial chancellor from 1862 to 1890. Until his resignation in 1890, Bismarck had a relatively freehand in conducting foreign policy. After three successful wars, he saw his task as promoting peace and gaining time so that the powerful German Empire would come to be accepted as natural. Bismarck's two areas of concern were the Balkans, where the disintegration of the Turkish empire could easily lead to conflict between the Habsburg monarchy and Russia, and France, where the desire to avenge the defeat at Sedan was strong. In each area a general European conflagration could flare up and involve Germany. In the following I am going to investigate the extent of which Bismarck was in control of Germany's Foreign Policy between 1871 and 1890. In the two decades proceeding the unification of Germany Bismarck was the dominant statesman of Europe, controlling the policy of Germany, settling disputes between other countries, and entangling all of Europe into a complex web of alliances and understandings, all of which were intended to preserve peace in Europe. If Germany made a foolish decision, this could ensue the disintegration of the whole system. In order to understand how the system created by Bismarck was dependant on Germany it is necessary to examine the predicament each power was in. The powers can be divided into two different classes: the satiated powers, Germany and Britain who were happy with the 'status quo'; and the malcontent powers, France, Russia and Austria-Hungary, which still had interest in European expansion In my opinion, one man cannot control the course of one nations history, although there can be no disputing that Bismarck was a wonderfully skilled and talented politician, I feel he acted to situations as they arose, rather than orchestrating events. ...read more.

Bulgaria was to be set up as an independent state, but in reality was to be a Russian puppet. Austria was allowed to occupy, though not to annex Bosnia and Herzegovina. Bismarck was extremely important to a peaceful settlement of the crisis. Even before the crisis, Bismarck was approached by Russia, asking if Germany would remain neutral in case of an Austro-Russian war. Bismarck's response was very similar to all his responses to this question throughout his rule: "we could endure that our friends should lose or win battles against each other, but not that one of the two should be so severely wounded and injured that its position as an independent Great Power ... would be endangered". Bismarck knew that he needed Russia to protect its northern border and Austria to secure its western border. He was unwilling to choose between Russia and Austria, since he needed both countries to counterbalance each other, the weakening of either one meant greater German dependency on the other. The reasons that Bismarck wanted peace were completely in line with Realpolitik: he wanted peace because peace and the status quo were favorable to Germany. The Eastern crisis demonstrates Bismarck's genius as a politician, planning and manipulating situations to his advantage, in order to maintain the status quo. However, an argument could be composed from a revisionist viewpoint, William Carr suggests, "The truth is that he acted once again on the spur of the moments to deal with an emergency situation-largely of his own making". This is demonstrated with his involvement in the Eastern Crisis. The first instance is shown with his dealing of the Balkan problem in1876. A solution he proposed that the British seize control of Egypt and the Suez; Austria takes Bosnia, Russia controls Bulgaria, leaving a weak Turkey to occupy the Straits. Bismarck, of his own accord, admitted that this was a picture of his 'fancy', rather than an immediate practicable solution. ...read more.

Her fleet, however, remained a threat to any power with maritime interests. Thus she was able to bully Russians into staying away from the straits, lest Britain recreate the Crimean alliance, or even attack Russia itself. In failing to concern Britain, Bismarck was unsuccessful in forming an ally against Russia On the other hand, it could be argued that Bismarck had no reason to involve Britain, as she was one of the two satiated powers and was interested in maintaining the status quo. Moreover Britain was an island, and was in a stage of isolationism. Involving Britain may have upset the Status Quo and resulted in further complications. Both arguments are extremely strong, and it is very hard to decide which is the stronger. Andrew Bonar Law said that, "There is no such thing as an inevitable war. If war comes it will be from a failure of human wisdom", I believe that Bismarck engineered Germany to maintain peace within Europe. However, whether Bismarck was in control of the bearing that Germany's foreign politics took between 1870 and 1890 is debatable and I perpetuate that Bismarck was an interventionist, rather than an intentionalist. He maneuvered and manipulated events as they happened, rather than foreseeing and planning for the events that arose. This is explanatory by the state of foreign affairs that Caprivi inherited, which ultimately led to the First World War. The Reinsurance Treaty that Bismarck had forged with Tsar Alexander II was a secret Treaty that Caprivi thought was too 'risky' and could have easily wrecked the Dual Alliance. He failed to resign the Treaty, therefore relations between Germany and Russia disintegrated and Russia began to gravitate toward France. Thus Bismarck's perplexed and somewhat confusing web of Treaties and Alliances, which were in a precarious position, became untangled, and hence World War One erupted. Therefore it is possible to argue that, although Bismarck managed to keep the newly United Germany at peace, what Law suggests is true of Bismarck, that in fact it was through Bismarck's "failure of human wisdom" that the First World war occurred. ...read more.