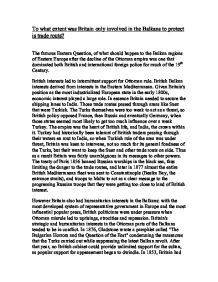 To what extent was Britain only involved in the Balkans to protect is trade routs?

To what extent was Britain only involved in the Balkans to protect is trade routs? The famous Eastern Question, of what should happen to the Balkan regions of Eastern Europe after the decline of the Ottoman empire was one that dominated both British and international foreign police for much of the 19th Century. British interests led to intermittent support for Ottoman rule. British Balkan interests derived from interests in the Eastern Mediterranean. Given Britain's position as the most industrialized European state in the early 1800s, economic interest played a large role. In essence Britain needed to secure the shipping lanes to India. Those trade routes passed through areas like Suez that were Turkish. The Turks themselves were too weak to act as a threat, so British policy opposed France, then Russia and eventually Germany, when those states seemed most likely to get too much influence over a weak Turkey. ...read more.

Britain's strategic and humanitarian interests in the Ottoman parts of the Balkans tended to be in conflict. In 1876, Gladstone wrote a pamphlet called "The Bulgarian Horrors and the Question of the East" condemning the massacres that the Turks carried out while suppressing the latest Balkan revolt. After that year, no British cabinet could provide unlimited support for the sultan, as popular support for appeasement began to dwindle. In 1853, Britain had gone to war rather than see Russian influence grow in the Balkans, but when the Russians invaded and defeated Turkey in 1877-78, Britain stood by. British leaders instead adopted a new policy to protect the sea lanes to India. In 1878 Britain took control of the island of Cyprus, and in 1883 occupied Egypt and the Suez Canal. With those outposts under control, Britain's need to intervene on the Balkan mainland waned, although Britain did keep an eye on Greece and Russia's territory on the Straits. ...read more.

and Disraeli, Salisbury in the 1880's seemed to have a differing view that the threat of Russain expansion to the trade routes was far over exaggerated. However, although the fear of Russia over the trade routes may have been slightly over exaggerated, Britain continued a policy of seeking to check Russian expansion in the 1880's. Salisbury supported the enlargement of Bulgaria as a buffer against Russia in 1885 aswell as the Mediterranean agreement of 1887 which along with Italy and Austria-Hungary aimed to contain Russian influence in the black sea. Salisbury was also criticized after the Armenian massacres of 1895, which left thousands dead, as he decided against acting against the Sultan, instead remaining wary incase Russia used this as another excuse to attempt to capture Constantinople. In essence, the key factor behind British involvement in the Balkans always seemed to be Russia, be it to indeed protect the trade routes, or other territory and to retain the "status quo" that suited Britain so well at the time. ...read more.