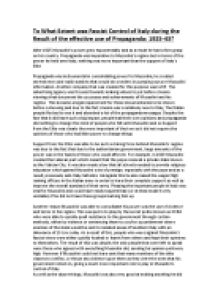 To What Extent Was Fascist Control of Italy The Result Of The Effective Use Of Propaganda?

﻿To What Extent was Fascist Control of Italy during the Result of the effective use of Propaganda: 1925-43? After 1925 Mussolini?s power grew exponentially and as a result he had a firm grasp on his country. Propaganda was imperative to Mussolini?s regime but in terms of the power he held over Italy, nothing was more important than the support of Italy?s Elite. Propaganda was instrumental in consolidating power for Mussolini; he created several news and radio stations that would do wonders in pumping out pro-Mussolini information. Another company that was created for this purpose was LUCE. The advertising agency was focused towards making videos to put before cinema viewings that document the successes and achievements of Mussolini and his regime. This became a legal requirement for these documentaries to be shown before a showing and due to the fact cinema was a relatively new to Italy; The Italian people flocked to see it and absorbed a lot of the propaganda messages. ...read more.

As a result of this, people who were against Mussolini?s fascist views were either quickly hushed or learnt from others and kept their opinions to themselves. The result of this was simple; the only people that were left to speak were those who agreed with everything Mussolini did, sending his opinion polls very high. However if Mussolini could not have sent that many members of the elite classes to confino, or thrust any violence upon them as they were the ones that his government relied on, giving a much more important role to play in Mussolini?s control of Italy. As well as the above things, Mussolini was also very good at making anything he did seem like a massive success story. For example, he hosted and won the 1934 football world cup, showing that Italy was changing things for the better. As well as this he also drained all the marshes near Rome to rid the populated area of the country as well as increasing grain production so that Mussolini could say that they were that one step closer to being ready for war by making themselves autarkic for grain. ...read more.

Even though it did have this effect, children did not have much of an effect on how popular Mussolini was, meaning it was not incredibly important during his time in office. In the years 1925-43, Fascist power increased exponentially. Although propaganda was an incredible force when it came to getting people rallied behind Mussolini, it was the incredible amount of support from the elite that allowed him to fully control every aspect of Italy. For example, if he had not raised the wages of army officers in 1935, they may have become very anti-Mussolini, resulting in Italy having a very unstable army. I do also agree that without propaganda, Mussolini would never had as much prestige amongst the Italian people as he did, especially later on in the years 1936-41, but it was the Elite of Italy who called the shots and they could break Italy if they were not appeased due to the fact they ran some of the most important aspects such as religion, politics, the army and big industry. All areas those are vital for the successful running of country. ...read more.