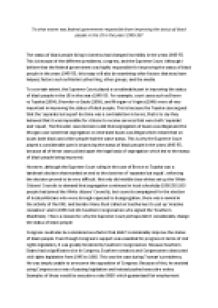 To what extent was Federal government responsible for improving the status of black people in the US in the years 1945-55?

However, although the Supreme Court ruling in the case of Brown vs Topeka was a landmark decision that marked an end to the doctrine of ?separate but equal?, enforcing the decision proved to be very difficult. Not only did middle class whites set up the White Citizens? Councils to demand that segregation continued in local schools(by 1956 250,000 people had joined the White citizens? Councils), but councils campaigned for the election of local politicians who were strongly opposed to desegregation, there was a revival in the activity of the KKK, and Senator Harry Byrd called on Southerners to put up ?massive resisatnce? and in 1956 led 101 Southern Congressmen who signed the ?Southern Manifesto). This is a reason for why the Supreme Court perhaps didn?t considerably change the status of black people. ...read more.

When the voting rights bill was introduced to congress by Eisenhower, Democratic opponents filibusted the bill which significantly weakened it, and even though the second voting rights bill passed, it was still too weak and therefore ineffective. Black voting only increased by 3%. If Truman had gotten more support then he would have been able to achieve everything in his report ?To secure these rights?, and he would have been able to tackle lynching issues, police brutality, voting rights, discrimination in the armed forces, employment and education and radical discrimination in the area of health. This is why Congress didn?t improve the status of black people, because without sufficient support then the presidents cannot help to improve their status. However, Congress did help improve the status of black people in some aspects. The 3rd civil rights bill is one of the examples. ...read more.