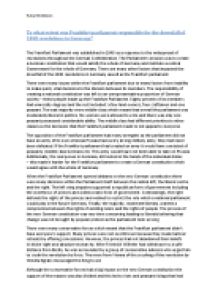 ﻿Ruby Middleton To what extent was Frankfurt parliament responsible for the downfall of 1848 revolutions in Germany? The Frankfurt Parliament was established in 1848 as a response to the widespread of revolutions throughout the German Confederation. The Parliament's mission was to create a German constitution that would satisfy the whole of Germany and institute a central Government for the whole of Germany. There are many other factors that impacted the downfall of the 1848 revolutions in Germany aswell as the Frankfurt parliament. There were many issues within the Frankfurt parliament due to many factors from inability to make quick, vital decisions to the division between its members. The responsibility of creating a national constitution was left to an unrepresentative proportion of German society ? these people made up the Frankfurt Parliament. Eighty percent of its members had university degrees and the rest included: a few land owners, four craftsmen and one peasant .The vast majority were middle-class which meant that overall the parliament was moderately liberal in politics. No women were allowed to vote and there was only one peasant possessed considerable ability. ...read more.

Finally, the majority, moderate liberals, wanted a compromise between the rights of existing rulers and the rights of people. The process of the new German constitution was very time consuming leading to liberals believing that change was not brought by popular protest as the parliament took so long. There were many conservative forces which meant that the Frankfurt parliament didn?t have everyone?s support. Many princes were not overthrown because they made tactical retreats by offering concessions. However, the princes had not abandoned their beliefs in divine right and absolute monarchy. After Friedrich Wilhelm had withdrawn to a safe distance from Berlin, he was surrounded by a group of conservative advisers who urged him to crush the revolution by force. The news from Vienna of the crushing of the revolution by Windischgratz encouraged the King to act. Although the conservative forces had a big impact on the new German constitution the support of the masses was also divided and this led to riots and peasant risings that had no aims. This meant that there was a lack of support that was needed in order for the revolution to occur. ...read more.

They followed the 19th century ideas of reasoned debate and agreed resolutions. Their naivety was exposed in their belief that they could convince the princes to merge and co-operate. The leaders of the era were unpopular. Freidrich Wilhelm IV was indecisive and inconsistent and in April of the following year he refused the crown from the Frankfurt depututation. He changed his mind to suit the people who surrounded him at the time, as he was urged by advisors. However, the revolutions cannot be classed as a total failure as although there were no immediate successes there were outcomes that in the long term would benefit Germany. There were many other factors that influenced the failure of the 1848 revolutions although the Frankfurt parliament impacted the failure the greatest amount. The Parliament was unable to take decisive action and so missed the opportunity of filling the power vacuum that had occurred in the second half of 1848 Germany. This meant that the rulers of the German states were able to re-establish their authority and thereafter had no need to support the Frankfurt Parliament. ...read more.