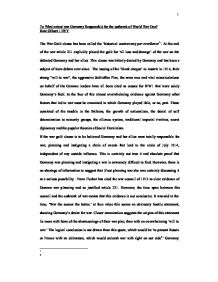 To What extent was Germany Responsible for the outbreak of World War One?

To What extent was Germany Responsible for the outbreak of World War One? Kate Gilbert 13WY The War Guilt clause has been called the 'historical controversy par excellence1'. At the end of the war article 231 explicitly placed the guilt for 'all loss and damage' of the war on the defeated Germany and her allies. This clause was bitterly denied by Germany and has been a subject of keen debate ever since. The issuing of the 'blank cheque' to Austria in 1914, their strong "will to war", the aggressive Schlieffen Plan, the arms race and vital miscalculations on behalf of the German leaders have all been cited as causes for WW1 that were solely Germany's fault. In the face of this almost overwhelming evidence against Germany other factors that led to war must be examined in which Germany played little, or no, part. These consisted of the trouble in the Balkans, the growth of nationalism, the denial of self determination to minority groups, the alliance system, traditional imperial rivalries, secret diplomacy and the popular theories of Social Darwinism. If the war guilt clause is to be believed Germany and her allies were totally responsible for war, planning and instigating a chain of events that lead to the crisis of July 1914, independent of any outside influence. This is certainly not true it and absolute proof that Germany was planning and instigating a war is extremely difficult to find. However, there is no shortage of information to suggest that if not planning war she was certainly discussing it as a serious possibility. Franz Fischer has cited the war council of 1912 as clear evidence of German war planning and so justified article 231. However, the time span between this council and the outbreak of war means that this evidence is not conclusive. It was said at the time, 'War the sooner the better,' at face value this seems an obviously hostile statement, showing Germany's desire for war. ...read more.

The Reichstag was mainly for show and had so little real power that it could make very few real changes. Ultimately, in Wilhelm Germany, the Kaiser's decision was law and despite the growth of the SDP the Kaiser, Chancellor and leaders refused to work with them or make any of the changes they begged for. They were seen as enemies of the state but to refuse to make any concessions to a party that size was bound to cause trouble and despite their repeated attempts to cripple the SDP nothing worked and they were left with growing social unrest. One way of quelling voices of dissent and justifying glaring inequalities in the social system was by relating social position directly to levels of patriotism. The elite saw their privileged positions as their just rewards for their strong support of the imperial state. Groups that wanted to bring about social or political change were portrayed as unpatriotic and disloyal and the government tried to weaken their appeal by stirring up feelings of nationalism. Germany looked to imperial and naval expansion and to a vigorous foreign policy to quell these voices of dissent at home. Tirpitz cited one of the benefits of that, "in the national purpose and economic gains consequent upon it lies a strong palliative against trained and potential Social Democrat".10 Attempting to quell voices of dissent through invoking feelings of patriotism and nationalism was a common tactic but one that backfired as the growth of fervent nationalist feelings soon put pressure back on the government to succeed in their ambitious aims. Only a few months before the war Chancellor Bethmann Hollweg complained that, "every day Germany sees its population growing by leaps and bounds; its navy, trade and industry are making unparalleled developments . . . it is forced to expand somehow or other; it has not yet found that 'place in the sun' which it is due."11 One of the main reasons for Germany's going to war was greed combined with the need for respect. ...read more.

Often the mutual fear can preserve peace. The blame cannot be placed heavily on the alliance system, as it wasn't as strong as it seemed. Despite her part in the Triple Alliance Italy did not join the war until April 26th 1915, when she came into the war on the side of the Triple Entente. Britain also became military involved without being bound by any treaty. Germany's unconditional promise of support to Austria and rapid declaration of war on France and Russia far exceeded its treaty obligations-which could only mean that Germany wanted a European war. In the 1920's and 30's the theory that Germany had always held, of collective responsibility, gained ground. It was thought that every country shared the guilt and that some factors were simply beyond the control of a single nation. Lloyd George summed up this feeling when he wrote, "the nations in 1914 slithered over the brink into the boiling cauldron of war without any trace of apprehension or dismay"18. The view that the countries entered into war gladly is, to some extent, right. War was used as a solution to domestic problems and as a unifying, moral boosting event. The wide scale death and destruction of the First World War had never been seen before and all countries involved envisaged a short, victorious war. There was a generation of men who had been brought up on tales of heroism and adventure and saw this new war as their opportunity to experience this for themselves. Lloyd George's view that war was an inevitable and unstoppable force is a convenient excuse for every country that played a part in its beginnings. This view must be massively re-worked to bear any semblance to the truth. It is true that there were many factors that contributed to war that were out of a single nations control but there were also those that could have been prevented and also countries' that actively and knowingly set a path for war. 1 2 3 4 5 6 7 8 9 10 11 12 13 14 15 16 17 18 1 ...read more.