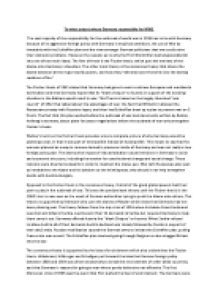 To what extent was Germany responsible for World War 1

﻿To what extent where Germany responsible for WW1 The vast majority of the responsibility for the outbreak of world war in 1914 has to lie with Germany because of its aggressive foreign policy with Germany?s empirical ambitions, the use of War by timetable with the Schleiffen plan and the view amongst German politicians that war could solve their domestic problems. However the reasons as to why the First World War started generally fall into one of two main ideas. The first of these is the Fischer thesis, which puts the entirety of the blame onto Germany?s shoulders. The other main theory is the consensus theory that shares the blame between all the major world powers, and how they ?slithered over the brink into the boiling cauldron of fire.? The Fischer thesis of 1961 stated that Germany had gone to war to achieve European and worldwide domination and that Germany hoped that its ?blank cheque? to Austria in support of the evolving situation in the Balkans would result in war. ...read more.

This theory is supported by Erdmann who uses the diaries of Riezler which show that Germany had not been planning war. The theory follows from the July crisis of 1914 when Archduke Franz Ferdinand was shot and killed in Serbia. Austria sent their 14 demands to Serbia but required Germany to help them carry it out. Germany offered Austria the ?blank Cheque? to Austria. When Serbia refused to allow Austria all of their demands Austria declared war closely followed by Russia in support of their ally Serbia. Russian mobilisation caused the German army to initiate the Schieffen plan, pulling France into war as well. The Schlieffen plan involved going through Belgium so also dragged Britain into the war. The consensus theory is supported by the idea of encirclement which also undermines the Fischer thesis. Hildebrand, Hillbruger and Schollgen put forward the idea that German foreign policy between 1908 and 1914 was driven obsessively to break the encirclement of other allied countries, and that Germany?s reasons for going to war where purely defensive not offensive. ...read more.

For me the idea that the German war was a defensive operation cannot hold much sway because of the huge scope of the German plan and more importantly the Schlieffen plan and how it aimed to gain such vast swathes of land and knock out its major global competitors. This means that the Fischer thesis has a very strong case that German war was entirely for personal gain. With the German war plans giving Germany such massive international gains and the evidence from diaries and the German War Council of 1914 make it impossible to believe that Germany was not planning this war. The Wehler twist does however fill in a lot of holes with the Fischer thesis giving a more reasonable reason for Germany going to war. Overall the vast majority of the blame has to lie with Germany, with the evidence of Germany planning for the war because of the internal pressures of the SDP and the international gains it would bring. However other powers cannot be absolved of blame as the old saying goes, it takes two to tango. ...read more.