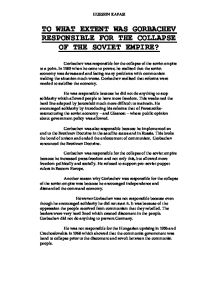 To What Extent Was Gorbachev Responsible For the Collapse of the Soviet Empire?

TO WHAT EXTENT WAS GORBACHEV RESPONSIBLE FOR THE COLLAPSE OF THE SOVIET EMPIRE? Gorbachev was responsible for the collapse of the soviet empire to a point. In 1985 when he came to power, he realised that the soviet economy was devastated and facing many problems with communism making the situation much worse. Gorbachev realised that reforms were needed to stabilise the economy. He was responsible because he did not do anything to stop solidarity which allowed people to have more freedom. This weakened the hard line adopted by Jaruzelski much more difficult to maintain. He encouraged solidarity by introducing his reforms that of Perestroika-restructuring the soviet economy - and Glasnost - where public opinion about government policy was allowed. ...read more.

Furthermore, there were many new issues that were coming up in USSR like there were many new groups like the Islamic Fundamentalism which Gorbachev had to think about. Moreover the Soviet empire was changing in political circumstances made buffer zone unnecessary as now no more land attacks would take place but instead use missiles e.g. ICBM's Overall I do think that Gorbachev was responsible for the collapse of the Soviet empire, because if it was not for him, there would be few demonstrations and people would not have freedom of speech and expression and would still have been deprived of freedom to criticise the Government. It was due to the introduction of his reforms which cause the Soviet Union to collapse but on the other hand there were other reasons to the collapse of the Soviet Union. HUSSEIN KAPASI ...read more.