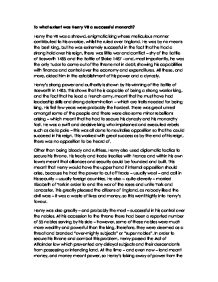 To what extent was Henry VII a successful monarch? Henry the VII was a shrewd, enigmatic king whose meticulous manner contributed to his avarice, whilst he ruled over England. He was by no means the best King, but he was extremely successful in the fact that he had a strong hold over his reign, there was little war and conflict - shy of the Battle of Bosworth 1485 and the Battle of Stoke 1487 - and, most importantly, he was the only Tudor to come out of the throne not in debt; showing his capabilities with finance and control over the economy and expenditures. All these, and more, aided him in the establishment of his power and a dynasty. Henry's strong power and authority is shown by his winning of the Battle of Bosworth in 1485. This shows that he is capable of being a strong warrior king, and the fact that he lead a French army, meant that he must have had leadership skills and strong determination - which are traits needed for being king. His first few years were probably the hardest. There was great unrest amongst some of the people and there were also some minor rebellions arising - which meant that he had to secure his dynasty and his monarchy fast. ...read more.

Furthermore, the appliance and use of bonds and recognisances - which stated that the subject would forfeit large sums of money to Henry VII if he should act on his own - enforced even tighter obedience and showed his power of control and success as a ruler over the nobles. However, Henry did not only hand out punishments to convey his position - he also handed out places in offices, rather than land and money, for those who were loyal to him. The loyal subjects eventually made up various Local Governments - equivalent of today's MPs - which were situated in smaller towns and cities to keep watch over them. This enabled Henry VII to benefit his position by setting up the court of requests. These courts listened to the cases brought by the poor to the king and tried to appease them on the king's behalf, or with the king's aid. This showed to the peasants that Henry VII cared for the poor and his influence and authority increased further. Moreover, the court of request and the local government enabled Henry VII to keep a watchful eye over his land and anticipate any form of opposition arising; securing his power of the land and establishing a strong dynasty. ...read more.

With more employment meant more work and money which kept the citizens happy and it gives another success to Henry VII. Moreover, Henry VII realised that overseas trade would benefit the economy and increase the wealth of the country, not to mention the strengthening of alliances between two countries. However, the navigation was somewhat limited, so sailing efficiently was extremely hard. This problem was combated with Henry's passing of the navigation act of 1485-6 which sought to break the foreign hold on England's trade. This was a huge success for Henry, as it did not only increase the resources going in and out and the independence of England, but the building of new ships, navigation, new ports, and training for the crew became the foundations for naval bases and Britain's powerful navy - which Henry's sons and daughters would build on. Also, the use of new ships, built and repaired the damaged relationship between France and England, and with the 1486 negotiations on a new commercial agreement which lifted the restrictions on a Franco-English trade, this bonding and alliance was further enforced. After some further discrepancies, both sides experienced unlimited trade. Henry did not stop there. He continued to pursue more ambitious trades to further his success and he soon started trading fine luxury items with Italy. The sudden expansion of England's trade ...read more.

It would have been better to have scrapped this final paragraph and written even a short conclusion summing up the relative importance of the factors that contributed to Henry's strong hold on power.

It is not sensible to try to cram too much in to an essay. Planning the key points and being selective is all part of the task. Without a conclusion a judgement has not been reached and this will often keep an essay out of the upper gradings. ***