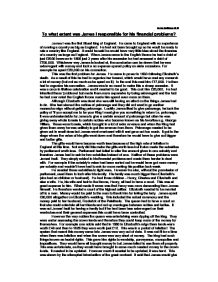 To what extent was James I responsible for his financial problems?

James Collinson L6 12 To what extent was James I responsible for his financial problems? James I was the first Stuart king of England. He came to England with no experience of running a country as big as England. He had not been brought up so he would be ready to rule a country like England. It could be said he would have very little idea about the finances of a country as large as England. When James came to the English throne he had a debt of just �2000 however in 1606 just 3 years after his accession he had amassed a debt of �700,000. Whichever way James is looked at, the conclusion can be drawn that he was extravagant with money and took a no expense spared policy on state occasions. For example he spent �20,000 on his coronation. This was the first problem for James. He came to power in 1603 following Elizabeth's death. As a result of this he had to organize her funeral, which would have cost any monarch a lot of money (but not as much as he spent on it). In the end this cost him �17,000. He then had to organize his coronation. James was in no mood to make this a cheap occasion. ...read more.

His family was much bigger than Elizabeth's (she had no children or husband). He had three children - Henry, Charles and Elizabeth and also a wife. He, his wife and heir to the throne, Henry, all had to have a court. This was at great expense to him. What made it worse was that Henry was more demanding than James himself. He therefore wanted a court of the highest caliber. Elizabeth needed to be married off to a man. Money would be paid to the man to thank him for taking the lady. James spent �90,000 altogether on Elizabeth's wedding. This included the actual ceremony and the money paid to her husband, Frederick of the Palatinate. The queen had to have a court so that she could entertain all her friends and set up marriages between nobles and ladies. It was not James' fault for having a family but if he had been less extravagant on their wardrobes and their general expenses this could have been controlled. However the very nobles the queen was entertaining were ripping off the king. They were under assessing the crown lands and therefore they could keep more of the money for themselves. For example one noble said that in 1560 in Elizabeth's reign there lands were worth �48 and then in 1626 they were worth just �12. ...read more.

He also became the mediator of Europe. This was because he was part catholic (through his mother) and part protestant (the way he was brought up). The wars James fought were not numerous and the most major was in Ireland. As a result this cannot really be thought of as a financial problem but more as a burden than he must always be ready for a war with Sapin i.e. have money available. This should have become less of a problem towards the end of his reign as he had a catholic daughter-in-law and a protestant son-in-law but it did not and at the conclusion of his reign he was a war with Span yet again. James did his best to stop his financing getting in to a bad situation by employing Lord Treasurers and stopping wars, but in conclusion has to b said James was simply too extravagant for the English throne at this time. It did not help that he did not have the best relationship with parliament (although better than his son - Charles I) and therefore they were unwilling to bail him out when he was in financial trouble. The general problem with inflation did not help James as well but a good monarch would have learnt to deal with this in the best way possible something that James did not seem capable of doing. ...read more.

**
While the answer is certainly along the right lines, it needs much more detail and supporting evidence. Moreover, the answer needs to be further stretched from an analytical perspective. It needs to be more rigorous in its assessment and allow factors to lead the content of each paragraph. As no dates are provided in the question, the student needs to offer a broad overview with carefully selected specifics which are well supported with evidence as suggested above.