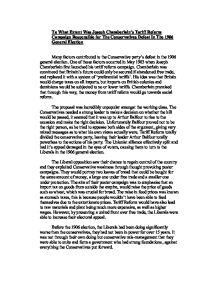 To What Extent Was Joseph Chamberlain's Tariff Reform Campaign Responsible for The Conservatives Defeat In The 1906 General Election.

To What Extent Was Joseph Chamberlain's Tariff Reform Campaign Responsible for The Conservatives Defeat In The 1906 General Election Many factors contributed to the Conservative party's defeat in the 1906 general election. One of those factors occurred in May 1903 when Joseph Chamberlain first launched his tariff reform campaign. Chamberlain was convinced that Britain's future could only be secured if abandoned free trade, and replaced it with a system of 'preferential tariffs'. His idea was that Britain would charge taxes on all imports, but imports on British colonies and dominions would be subjected to no or lower tariffs. Chamberlain promised that through this way, the money from tariff reform would go towards social reform. The proposal was incredibly unpopular amongst the working class. The Conservatives needed a strong leader to make a decision on whether the bill would be passed, it seemed that it was up to Arthur Balfour to rise to the occasion and make the right decision. ...read more.

The raise in food prices was known as stomach taxes, this is because people wouldn't have been able to feed themselves due to the extortionate prices. Tariff Reform would have also lead to raw materials and plant being much more expensive, as well as higher wages. However, by presenting a united front over free trade, the Liberals were able to increase their electoral appeal. Before the 1906 election, the Liberals had been doing significantly worse than the conservatives, they had not been in power for over 15 years. It was not through their own doing but conservative mis-management that they were able to unite and form a government who had strong foundations, against everything the Conservatives put forward. In the 1900 election (the khaki election), the conservatives gained a comfortable victory. The public were full malice and gave their complete backing to the Boer war, which had started in 1899. ...read more.

By-election losses after May 1903 clearly indicated that the government's image had been badly impaired. Between August 1903 and January 1906, there were 17 by-elections in seats which had been won by the Conservatives in the 1900 general election. In none of these by-elections was a Conservative candidate successful, emphasising how much the Tariff Reform campaign had actually marred the Conservatives. "Tariff Reform, which had destroyed the unity of the unionist party and alienated public opinion, was the most important single reason for the Liberal success in 1906." -Aikin. Without a doubt Joseph Chamberlain's blindness to public opinion was the crucial factor between 1903 and 1906. His campaign split the Liberal Unionist-Conservative alliance and contributed to its defeat in the election of 1906. Ill health ended Chamberlain's public life in 1906, but his tariff policy was adopted (1919, 1932) within the lifetime of his sons, Austen and Neville. ...read more.