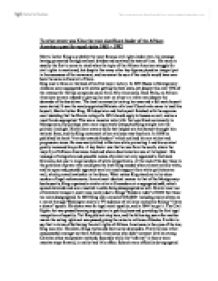 To what extent was King the most significant civil rights leader ?

To what extent was King the most significant leader of the African American quest for equal rights 1865 - 1992 Martin Luther King is probably the most famous civil rights leader ever, his message having permeated through national divides and survived the tests of time. His name is usually the first to come to mind when the topic of the African American struggle for civil rights in mentioned, but despite this many other key figures played an integral part in the successes of the movement, and we cannot be sure if the results would have ever been the same without all of them. King rose to fame on the back of his first major victory. In 1955 Buses in Montgomery Alabama were segregated with whites getting the best seats, yet despite this over 75% of the revenue for the bus companies came from Afro-Americans. Rosa Parks, an African American woman refused to give up her seat on a bus to a white man despite the demands of the bus driver. ...read more.

Similar was true of interstate transport, and it was mainly due to Kings "freedom rides" of 1961 that these too were desegregated. In 1963 King led a crowd of 250,000+ including many whites on a march through Washington and to a TV audience of millions recited his famous "I have a dream" speech. His dream was for legal racial equality, and in 1964 he got it. The Civil Rights Act was passed banning segregation in public places and providing the first legal recognition of equality. Yet King did not stop here, and the following year after another march the voting rights act was passed giving the votes to millions of blacks. It is fair to say that in terms of furthering the civil rights of African Americans in the eyes of the law, King was vital. However, Kings tactics did have some downsides. Firstly he was rather unsuccessful amongst northern African Americans who didn't connect with his strong Christian ethos and passive methods. Secondly while his "reforms" in theory were massive steps forward, in reality had little effect. ...read more.

In evaluation we must point out that X was very northern centric, and had little to no impact in the south where the bulk of the black population lived. His methods were also significantly criticized. The justification behind lynching and white supremacist groups in the south was that the freed black man was a "violent animal" who would be a s****l menace to all white women. By advocating violence, X played into the hands to groups such as the KKK who could use his actions as evidence of that their propaganda was true. He also alienated the entire white population of the USA and made political dealings with politicians almost impossible. His actions could be argued to have actually been a major hindrance to the civil rights movement, leading to the fragmentation of leadership and support, the loss of political influence and the eventual infighting within the civil rights movement. At the end of the day it was his own movement, the Nation of Islam, that assassinated him. ...read more.