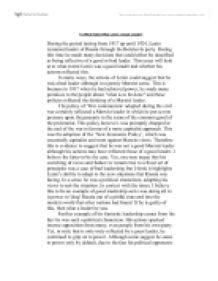 To What Extent Was Lenin a Good Leader?

To What Extent Was Lenin a Good Leader? During the period lasting from 1917 up until 1924, Lenin remained leader of Russia through the Bolshevik party. During this time he made many decisions that could either be described as being reflective of a good or bad leader. This essay will look at to what extent Lenin was a good leader and whether his actions reflected this. In many ways, the actions of Lenin could suggest that he was a bad leader although in a purely Marxist sense. This is because in 1917 when he had achieved power, he made many promises to the people about "what is to be done" and these policies reflected the thinking of a Marxist leader. The policy of 'War communism' adopted during the civil war certainly reflected a Marxist leader in which he put severe pressure upon the peasants in the name of the common good of the proletariat. ...read more.

If he is guilty of this, then what a leader he was. Further example of his fantastic leadership comes from the fact he was such a political chameleon. His actions sparked intense opposition from many, even people from his own party. Yet, in style that is only truly reflected by a great leader, he continued to grip on to power. Although some suggest he came to power only by default, due to the fact his political opponents all failed the people in some way, one cannot refute the fact that he had a strong part to play in the people's eventual dislike of his political enemies in 1917. This was through the careful use of propaganda slogans such as "peace, land, bread". These modifications to his views enabled him to gain popularity. However, once they were in charge, they were still not the most favoured party. ...read more.

The Brest-Litovsk treaty with Germany sealed their safety in World War 1 despite losing much land. However, he made the treaty on a gamble that Germany would lose the war and Russia would get it's land back. It paid off. One may suggest that this risky gamble was not wise and therefore makes Lenin a bad leader. Yet, the simple fact remains that it did work and Russia could only reap the rewards. Through all the flaws that Lenin possessed, most notably arrogance, he did make Russia a better place economically, even though it was difficult getting there. On this alone he must be rated a great leader. Had he not have been so great and adapted his views and methods so much, he may not have been successful. He used the time-proven method of trial and error. He succeeded where all others had failed. He may not have been a good Marxist leader, but this was not the question at hand. To what extent was Lenin a good leader? He was a prime example of one. ...read more.