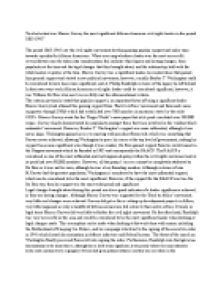 To what extent was Marcus Garvey the most significant African-American civil rights leader in the period 1865-1945?

﻿To what extent was Marcus Garvey the most significant African-American civil rights leader in the period 1865-1945? The period 1865-1945 saw the civil rights movement develop gaining popular support and make steps towards equality for African Americans. When assessing whether a leader was the most successful several factors must be taken into consideration; this includes their legacy and lasting changes, their popularity at the time and the legal changes that they brought about, and the relationship held with the white leaders in power at the time. Marcus Garvey was a significant leader, he created ideas that gained him general support and started a new political movement, however, socially Booker T. Washington could be considered to have been more significant, and A. Phillip Randolph in terms of the legacy he left behind. In their own ways each African American civil rights leader could be considered significant, however, it was William Du Bois who most successfully met the aforementioned criteria. The criteria previously stated that popular support is an important factor of being a significant leader. Marcus Garvey had attained this gaining support from ?Back to Africa? movement and thousands more supporters through UNIA which had established over 700 branches in numerous states by the early 1920?s. ...read more.

This assumption can be made when looking at the work done with unions including the Brotherhood of Sleeping Car Porters, and his campaign which led to the signing of the executive order in 1941 which barred discrimination in defence industries and federal bureaus. The threat of the march on Washington finally pressured Roosevelt into signing the order. Furthermore, Randolph won the fight to ban discrimination in the armed forces, although this in itself seems significant, it was poorly enforced as arms industries in the south continued to be segregated. Du bois had great political influence and this was seen when in the aftermath of racial violence in 1906, Du Bois urged blacks to withdraw their support from the Republican Party, because Republicans Roosevelt and William Howard Taft did not support blacks. Most African Americans had been loyal to the Republican Party since the time of Abraham Lincoln. To some extent this action changed the face of American politics. The success of the NAACP bringing about constitutional change in the 1930?s can be attributed to Du Bois as well. They stopped the appointment of a known r****t to the Supreme Court. However, these changes were not clear and Du Bois? involvement in the NAACP campaign was limited. ...read more.

However, this does not change the fact that the organizations did have greater influence and they were a legacy. Garvey could be considered to be the most influential African American leader in the period 1865 to 1945 if we only look at his significance in terms of influence and gaining widespread support. However, he failed in being significant in making legal changes, which could be considered to be most significant; leaving behind an entrenched legacy. Furthermore, he met directly with the KKK. Randolph however, succeeded in making legal changes and helped the formation of black workers unions, however he failed to widen his support base as his political beliefs limited his involvement with other civil rights movements. Although Washington had close ties with the white house this did not result in any real constitutional change, furthermore, his actions were localized making it hard for him to be considered as the most significant leader of the national civil rights movement. It is Du Bois who can be considered to be the most significant leader of the civil rights movement of the period. It is a combination of his writing and his actions in both the Niagara movement and the NAACP, as they brought about constitutional change and the NAACP was one of the most popular civil rights groups that has existed. ...read more.