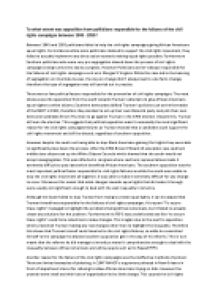 To what extent was opposition from politicians responsible for the failures of the civil rights campaigns between 1945 -1955?

Furthermore the problem of few pickets was made worse by the closing down of NAACPs offices in the south. This caused more failures for the civil rights campaign?s as the NAACP who had organised the New Orleans protest were now unable to organize any protests at all. The most ineffective method of protest was that of COREs journey of reconciliation. White citizens sat in black areas and vice versa showed that the decision of 1946 Morgan V Virginia banning segregation on interstate busses was not being carried out. While the protest highlighted that while African Americans had de jure rights they didn?t enjoy them in practise. However on the other hand this could be responsible for the failures of civil rights campaigns as like NAACPs protests it failed to force southern states to actually make desegregation on interstate busses a de facto change. Legal factors were also an important cause for the failures of the civil rights campaigns. While African Americans had progressed with the help of the NAACP these only amounted to de jure victories. Plessey V Ferguson had been overturned by the supreme court saying that separate but equal was against the constitution, yet it was still being practised throughout America, especially in the r****t south. ...read more.

This is because despite not being able to prevent African Americans from gaining civil rights they did manage to limit it greatly. In the Brown case, despite the supreme court deeming segregation in schools against the constitution, southern politicians such as Governor Faubus still refused to implement desegregation, only then giving black citizens rights when the federal army was called in. Furthermore southern politicians in congress made sure policies advancing civil rights didn?t get through, and therefore the ones that were put in place didn?t go far enough to deal with the inequality throughout America. However Legal factors such as de jure victories not being made into de facto changes also severely hindered the civil rights campaign. This is because although African Americans were finally been granted the same rights as white people by the Supreme Court, they were still unable to enjoy them. The r****t south, where discrimination was widespread found ways such as the grandfather clause and literacy tests keep black people as second class citizens as opposed to equals. This when paired with r****t groups such as the KKK kept African Americans down through terror making black citizens less likely to campaign for their rights as seen in the lack of protests during 1945 ? 1955. ...read more.