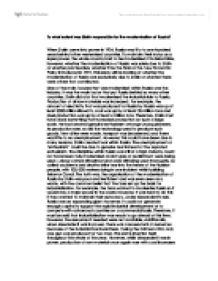 To what extent was Stalin responsible for the modernisation of Russia?

To what extent was Stalin responsible for the modernisation of Russia? When Stalin came into power in 1924, Russia was fifty to one hundred years behind other westernised countries. To maintain their status as a super power, the whole country had to be modernised. It is debatable, however, whether the modernisation of Russia was solely due to Stalin or whether past leaders, whether it be the Tsars or the New Economic Policy introduced in 1921. This essay will be looking at whether the modernisation of Russia was exclusively due to Stalin or whether there were others that contributed. One of the main focuses that was modernised within Russia was the industry. It was the main factor that put Russia behind so many other countries. Stalin did a lot that modernised the industrial side to Russia. Production of all raw materials was increased. For example, the amount of electricity that was produced for Russia by Russia was up at least 5000 million kilowatts, coal was up by at least 35 million tons and steel production was up by at least 4 million tons. Therefore, Stalin must have done something that increased production on such a large scale. He had created genuine enthusiasm amongst young pioneers. ...read more.

This certainly was the first step towards modernisation as serfs were once again liberalised. However, the tsars wished to keep their autocratic leadership, therefore it was not exactly freedom. Serfs were given less land than they had before and it was often not enough to support their family, therefore, it begs the question as to how they could make the surplus food to improve the economy if they could not even support their family. Also, regardless of how free the serfs were in theory, the Mir placed restrictions on travel, therefore, things were not modernised. Before the landowners were in charge of the serfs, yet they no longer had the power, therefore, a new system was needed to govern the serfs. However, within the time needed to set up the new government, violence spread across the countryside. Russia ended up being more backward than it was before the emancipation. Stolypin also attempted to modernise the agricultural sector of Russia, however, his plans were not put into power as WWI began, and therefore all interest went into Russian industry. Lenin continued to try to modernise Russia's agricultural when he was in power under his policy of war communism. Russia was constantly suffering from famines due to peasants keeping excess grain and selling it for large amounts of money, as opposed to it being taken off them directly and being distributed centrally. ...read more.

Social sciences were dominated by Marxist ideology and many scholars that didn't approve were purged. Nevertheless, it must have been modernised as the number of children starting school rose dramatically. Stalin continued to contribute to the social liberalisation. Girls were given equal education opportunities with millions benefitting from literacy campaigns in his power. Again, however, this is not solely due to Stalin, as the literacy campaigns would not have been started without the original introduction by Lenin. Therefore, in conclusion, it cannot be said that the modernisation of Russia was solely due to Stalin. However, it is more suitable to say that different leaders were successful in modernising different things in Russia. For example, as previously shown, Stalin made the most difference to agriculture. Nevertheless, it is also noted that in many of these policies, the successes of modernisation are due to more than one leader. For example, Stalin would not have been able to make such a difference to the education system if Lenin had not come up with a similar idea previously. Additionally, Stalin would not have been able to make such a difference in agriculture if Alexander II had not already laid down the foundations for change. Therefore, this essay concludes that whilst it was mostly Stalin that finished modernising Russia, the process lasted a long time which had contributions of many leaders which additionally lay down the foundations for many of Stalin's future policies. ...read more.