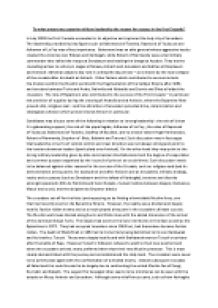 To what extent was superior military leadership the reason for success in the first Crusade?

﻿To what extent was superior military leadership the reason for success in the first Crusade? In July 1099 the First Crusade succeeded in its objective and captured the holy city of Jerusalem. The leadership provided by key figures such as Bohemond of Taranto, Raymond of Toulouse and Adhemar of Le Puy was of key importance. Bohemond was an able general whose aggressive tactics created the victories over Ridwan and Kerbogah, while Robert of Normandy was a vital military commander who rallied the troops at Dorylaeum and leading the charge at Ascalon. They led the crusading armies to victory in sieges at Nicaea, Antioch and Jerusalem and battles at Dorylaeum and Antioch. Adhemar played a key role in uniting the lay princes ? as is shown by the near collapse of the crusade after his death at Antioch. Other factors which contributed to success include the divisions within the Muslim world with the fragmentation of the Seldjuk Empire after 1092, and tensions between Turks and Arabs, Fatimids and Abbasids and Sunnis and Shias all aided the crusaders. The role of Byzantium also contributed to the success of the First Crusade ? in particular the provision of supplies during the crossing of Anatolia and at Antioch, where ...read more.

The Seljuks had overrun the Sunni territories in the East as well as the Byzantines in 1071. They had occupied Jerusalem since 1069 but, had themselves become faction ridden. The death of Malik Shah in 1092 led to his territory being betrothed to his son Barkiyarak and his brother, Tutush. These were deeply hostile and with Barkiyarak overrun Tutush?s territory after the battle of Rayy. However Tutush?s followers refused to yield to their new overlord and when the crusaders arrived, many preferred them than their new Muslim protector. This is most clearly demonstrated with the journey across Anatolia and the Holy Land. The crusaders were never to be as fortunate again with the confrontation of a divided enemy. Indeed subsequent crusades all failed and this could be said to be largely due to confronting the united Muslim foe of Zengi, Nurredin and Saladin. The support for beseiged cities seems to be minimal as can be seen with the attacks on Nicea, Antioch and Jerusalem. Although some relief forces came, such as from Kerbogha at Antioch, it does not feel to be a universal response to the crusader threat. ...read more.

Yet, even the knights had the fear of going to hell. Thus the chance to fight and kill as an act of penance allowed them to be successful on the crusade both willingly and without fear. On many occasions during the crusade, the turning point of the battle was morale levels of the crusaders. In particular, the discovery of the Holy Lance during the siege of Antioch in 1097 by Raymond and Peter Bartholomew motivated the crusaders to continue their efforts to defeat the Muslims because this all mighty discovery proved to them that God was supporting them. The armies were facing great threat from the Seljuk Troops from within Antioch. After days and days of fighting and in many cases losing, the crusaders, led by Bohemond, were losing motivation and confidence. Lack of food and supplies contributed to this. However, the discovery of the holy lance in Antioch gave these crusaders the confidence that God provided them with due to their spiritual beliefs. This meant that on the 28th June 1098 the Crusaders were strong enough to march towards Jerusalem believing that they had the support of God. This common interest brought the troops together making them stronger and brutal. ...read more.