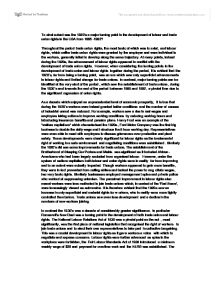 To what extent was the 1920s a major turning point in the development of labour and trade union rights in the USA from 1865-1992?

In particular Roosevelt's New Deal was a turning point in the development of both trade union and labour rights. The National Labour Relations Act of 1935 was a pivotal point as the act, most significantly, was the first piece of national legislation that recognised the right of workers to join trade unions and to elect their own representatives to take part in collective bargaining. This was a crucial development in labour rights as it gave workers a voice with which to negotiate and express concerns. Labour rights were further advanced as spies in the workplace were forbidden, the Fair Labour Standards Act of 1938 introduced a minimum weekly wage of $25 and payment for overtime work and the NLRB was established. The NRLB was able to bargain on behalf of workers and reinstate unfairly dismissed employees. The act also facilitated the expansion of trade union membership which rose to 9 million by 1938. It also meant that for the first time trade unions were being recognised by employers, for example General Motors and Chrysler officially recognised the Union of Auto Workers in 1937. The 1930's were also significant as a turning point as the Committee on Industrial Organisation was created which represented unskilled workers and unlike before black workers, other ethnic groups and women benefited from the opportunity to join the CIO. ...read more.

Unions' powers to improve labour rights were limited as employers refused to recognised organised labour. Moreover, instances such as the Haymarket affair and the growing number of immigrant labour created divisions in the workforce which undermined the development of both labour and trade union rights. Similarly, any progress that had been made for workers rights was limited to rights for white, male workers and was dependent on economic fluctuation which continued up to 1914. There was a marked decline in organised labour from 1970 and by 1992 the development and power of organised labour had begun to regress. As a result the end of the period was an extremely significant turning point as unlike before, the developments made in the advancement of trade union, and to a slightly lesser extent, labour rights were reversed. Of great significance was the 1981 PATCO air traffic controllers strike. The traffic controllers strike was met with hostility by the Federal Government, a backlash in public support for trade unions and a dramatic decline in the membership of industrial unions from 27% to 12% by 1990. Moreover, the economic recession during the mid-1970s to 1992 and changing composition of the workforce further weakened trade union and labour rights. ...read more.

The student has an excellent understanding of the question, and they show this in the introduction by defining Progressive, which shows immediately that they are knowledgeable. They then select the presidents they will consider, which shows they can select relevant ...

The student has an excellent understanding of the question, and they show this in the introduction by defining Progressive, which shows immediately that they are knowledgeable. They then select the presidents they will consider, which shows they can select relevant facts. Weaker students might have chosen two random presidents to contrast with Wilson, but by choosing those who were president around the same time, the student is showing they can talk about the examples most relevant to the question. A strength of this essay is the way the student considers each of the three presidents in detail: this answers the question because it shows they are aware that Wilson might not have been the most Progressive president, and they are thinking widely and considering the alternatives.

The student uses some good evidence in their essay, such as the use of dates - "Trade Commission Act (1914)" is good because it shows the student can place events into a timeframe rather than just quote names of laws. It would be even better if this student had pointed out the significance of the time it was passed - they could point out that it was almost at the start of his presidency, which would show that he wanted to pass Progressive laws like this as soon as possible. This would be good, as talking about the significance of events shows understanding while talking about the details of them only shows a good memory. The student needs to take care with factual evidence: because American elections are nearly always in November and there is a gap while the previous president leaves, presidents become president the year after they are elected, so it was inaccurate to say "Taft was a president from 1908 - 1912". It is also inaccurate to say "he is well known for being Ã¢â‚¬Ëœhand picked by Theodore RooseveltÃ¢â‚¬â„¢" as American presidents are not appointed by the president before them, they are elected. It is important to get facts correct as much as possible because several mistakes in the same essay will suggest you have little understanding - or you haven't revised - so always make sure you copy down information carefully when making revision notes. However, the conclusion is excellent as the student picks Wilson as the most progressive president, which is good as it answers the question and shows they can assess evidence to find an interpretation they agree with.

The quality of writing lets this essay down. At times it comes across as informal, which is bad because Progressivism is a serious historical topic. Instead of saying ''Now we have looked at both Roosevelt and Taft'', it would be better to say ''After consideration of both Roosevelt and Taft...''. Try to avoid using ''we'' in essays altogether (unless it's from a quote), as you are trying to create an argument, not create a relationship with the reader. On the plus side, the essay's spelling, grammar and punctuation are excellent, which is good because it means the examiner doesn't have to work out what the student is trying to say and can instead focus on giving them marks for their argument and knowledge.