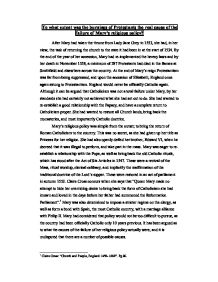 To what extent was the burnings of Protestants the real cause of the failure of Mary's religious policy?

To what extent was the burnings of Protestants the real cause of the failure of Mary's religious policy? After Mary had taken the throne from Lady Jane Grey in 1553, she had, in her view, the task of returning the church to the state it had been in at the start of 1534. By the end of the year of her accession, Mary had re-implemented the heresy laws and by her death in November 1558, a minimum of 287 Protestants had died in the flames at Smithfield and elsewhere across the country. At the end of Mary's reign Protestantism was far from being suppressed, and upon the accession of Elizabeth, England once again swung to Protestantism. England would never be officially Catholic again. Although it can be argued that Catholicism was not a total failure under Mary, by her standards she had certainly not achieved what she had set out to do. She had wanted to re-establish a good relationship with the Papacy, and have a complete return to Catholicism proper. She had wanted to restore all Church lands, bring back the monasteries, and most importantly Catholic doctrine. Mary's religious policy was simple from the outset; to bring the return of Roman Catholicism to the country. This was no secret, as she had given up her title as Princess for her religion. She had also openly defied her brother, Edward VI, when he decreed that it was illegal to perform, and take part in the mass. Mary was eager to re-establish a relationship with the Pope, as well as bring back the old Catholic rituals, which has stood after the Act of Six Articles in 1547. These were a revival of the Mass, ritual worship, clerical celibacy, and implicitly the reaffirmation of the traditional doctrine of the Lord's supper. These were restored in an act of parliament in autumn 1553. Claire Cross concurs when she says that "Queen Mary made no attempt to hide her overriding desire to bring back the form of ...read more.

Jasper Ridley also points out the lengths that Foxe went to amend inaccuracies pointed out to him by Catholics and neutrals alike.16 From the evidence above, it would seem that the burnings were having a large influence on the people of England, and at first glance, would appear to be the cause of the failure of Mary's religious policy. There were, however, other factors, which may have limited Mary's success, one of which may have been her marriage to Philip II of Spain. Mary had planned a marriage alliance with Spain, which had been arranged by Charles V and Mary herself. Charles himself was too old at the time to marry Mary himself, so he gave her his son, Philip. This was not a popular move in England, which seems to have culminated in Wyatt's rising in January 1554. The lack of popularity of the marriage is shown well, when on the 16th of November 1553, a parliamentary delegation asked Mary not to wed a foreigner. David Starkey describes public opinion towards the marriage; "...the reaction [to news of the marriage] was uniformly hostile. The lower orders in England hated all foreigners and foreign ways". It appears that a national opposition to Philip sprang from anti-papal xenophobia linked, via English commercial connections, to German and Flemish fears of 'Spanish tyranny.' This is backed up from a paper, which quotes William Isley to have said "...the Spanyards was commyynge into the realme wt harnes and handgonnes, and would make us Inglish men wondrous...vile...."17 Also, a special oath of allegiance had been administered amongst the royal troops, which included an oath of allegiance to Philip II. When the soldiers came into contact with Wyatt and his men crying, "we are Englishmen!" all but a handful defected to Wyatt's cause. This suggests that anti-Spanish feeling was strong enough to break a royal oath and defect, rather than fight a small band of 4000 men. ...read more.

only one man was opposed, and was "a man who enjoys no support."27 We cannot tell however, how many Protestants were uncovered and nation-wide public feeling towards Catholicism is not officially recorded. In conclusion, it seems that there are some very mixed views about the effect that the burnings had on the English people, and how they affected Mary's religious policy. The burnings, coupled with some other Catholic blunders may have led to an overall failure of a policy that probably should have been achieved fairly easily. The numbers of Catholics were evident in the1549 risings, and popular support for risings in Mary's reign was not great. However, Mary still managed not to achieve what she had set out to do. This could be put down to an overall shift in opinion due to the burnings. It could be said however, that Mary's lack of time played a great part in the ultimate lack of success. If this were the case, then it could be argued that Mary's religious policy was not a failure at all, but simply incomplete. After all, she had implemented the reinsertion of the monasteries, and performed a total return to Catholic doctrine. The problem of time is emphasised by the fact that Mary was not able to replace the bishops that had been in place under Edward until November 1556. Perhaps if Mary had had more time then she would have been able to complete her transition. Also her lack of an heir to carry on her work was a major downfall. Overall then I think that the question is still left open to interpretation, although I would have to say that I so think that Mary's burnings must have had an effect, and the evidence supports that there was an effect to some extent. I also agree however, that time played an important role, and the true religion would have been fully implemented, and would have lasted, had Mary had more time on the throne, and an heir. ...read more.