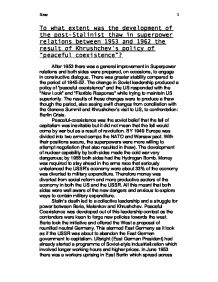 To what extent was the development of the post-Stalinist thaw in superpower relations between 1953 and 1962 the result of Khrushchevs policy of peaceful coexistence?

To what extent was the development of the post-Stalinist thaw in superpower relations between 1953 and 1962 the result of Khrushchev's policy of "peaceful coexistence"? After 1953 there was a general improvement in Superpower relations and both sides were prepared, on occasions, to engage in constructive dialogue. There was greater stability compared to the period of 1945-52. The change in Soviet leadership produced a policy of "peaceful coexistence" and the US responded with the "New Look" and "Flexible Response" while trying to maintain US superiority. The results of these changes were to produce a thaw though the period, also seeing swift changes from conciliation with the Geneva Summit and Khrushchev's visit to US, to confrontation: Berlin Crisis. Peaceful-coexistence was the soviet belief that the fall of capitalism was inevitable but it did not mean that the fall would come by war but as a result of revolution. BY 1949 Europe was divided into two armed camps the NATO and Warsaw pact. With their positions secure, the superpowers were more willing to attempt negotiation (that also resulted in thaw). The development of nuclear capability by both sides made the cold war very dangerous; by 1955 both sides had the Hydrogen b**b. Money was required to stay ahead in the arms race that seriously unbalanced the USSR's economy were about 33% of the economy was diverted to military expenditure. ...read more.

BY 1958 data from U2 spy planes showed that the US had nuclear superiority over the USSR. Eik was more inclined to negotiate. Eik had the confidence to pursue his own policies and was a firm believer in face-to-face diplomacy making. The public rhetoric of hard line anti-communist did not always translate into practical policy making. In part the New Look policy was designed to save money on conventional arms by relying on fewer but more powerful nuclear weapons (more bang for the buck). By 1954 12% of US GNP was spent on armaments. Ideally Eik would have liked to reduce this and that entailed seeking some kind of agreement with the USSR. Hence the US government was facing many of the same pressures as the USSR form the early 1950s and was prepared to reach limited forms of accommodation with its opposite number. The first crisis in the "thaw" period came in Hungary, which showed the vulnerability of the Soviet sphere of influence. Calls of liberalization within Hungary were encouraged by Khrushchev's policy of De-Stalinization and demonstrated that changes within the USSR could have an impact on its satellite states. De-Stalinization encouraged reform by criticizing Stalin's system of terror and by Nikita's suggestion that there could be more than one road towards socialism. De-Stalinization led to calls by the general public in Eastern Europe for a liberalization bi its regimes. ...read more.

in return for a neutral Germany was unlikely to produce results. Khrushchev was now willing to agree to the solution proposed by the East German government. To stem the exodus of its own people the East German government closed the main frontier between East Germany and West Germany in 1958 but it was still possible to move from East Germany into West Berlin. The continued loss of population threatened the survival of East Germany. Ulbricht had wanted a Berlin Wall for some time nut had been overruled by Nikita. He had now changed his mind. The Wall was referred to in the west as the "Wall of Shame", The East German government called it the "anti-fascist protective barrier". It became a symbol of a divided continent. East Germany was stabilized but at the price of advertising to the world that communist citizens had to be penned in to stop them escaping. In conclusion, superpower relations during the 1953-62 periods reflected the stability of the spheres of influence established in Europe. Both sides felt secure enough to pursue different approaches to those followed since 1945. Military and economic concerns pushed both sides towards an accommodation with each other. A change in leader in both USA and USSR promoted different approaches as each new leader tried to impose their own particular stamp on the policy. The lurch form crisis to crisis was in some ways a consequence of the wrong policy pursued by Nikita. The large degree of power vested in the Soviet leader was a product of the political system set up by Stalin. ...read more.