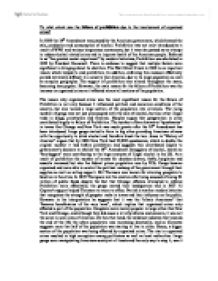 To what extent was the failure of prohibition due to the involvement of organized crime?

To what extent was the failure of prohibition due to the involvement of organized crime? In 1920 the 18th Amendment was passed by the American government, which banned the sale, production and consumption of alcohol. Prohibition was not only introduced as a result of WW1 and various temperance movements, but it was also passed as an attempt to reduce alcohol related crime and to improve health of the American people. Referred to as "the greatest social experiment" by modern historians, Prohibition was abolished in 1933 by President Roosevelt. There is evidence to suggest that multiple factors were significant in bringing about its abolition. The Wall Street Crash in 1929 is an important reason which helped to end prohibition. In addition, enforcing this measure effectively proved extremely difficult in a country like America, due to its large population as well as complex geography. The support of prohibition also altered throughout the years, becoming less popular. However, the main reason for the failure of Prohibition was the increase in organized crime as it affected almost all sections of the population. The reason why organized crime was the most significant reason for the failure of Prohibition is not only because it influenced political and economic conditions of the country, but also turned a large section of the population into criminals. ...read more.

He explains further that banning Prohibition would favour the industry and help economy as it" would provide employment for a million men". The depression in the country was forcing many families to move into cities in order to find work; therefore the urban population was rising. By reopening legal alcohol industry, the government would have been able to increase the national income from tax, and invest it in order to help the situation, therefore government would have directly benefited from this, and so would private businesses. On the other hand, the government could have successfully found other solutions to the depression in America without banning Prohibition if it wasn't already failing by 1929. The corruption created by the rise in organized crime made it difficult for authorities to impose any laws effectively, hence the first step was to reduce influence of large mafias, and this could have only been achieved through repealing Prohibition. Therefore, although Wall Street Crash caused a change in American society on an economic and social level, the increase of organized crime was far more important for government's decision to pass the 20th Amendment. The opposition to the 18th Amendment was rising throughout the years, and in addition the original supporters started to become divided. The concept of individual freedom started to be regarded with more importance and particular groups demanded repeal of the 18th Amendment. ...read more.

He suggests that prohibition was doomed because alcohol was easy to construct from legal substances like "near- bear" and the government was unable to prevent individuals carrying out that process. Sanders proposes that geography of America enabled gangsters to take advantage of its long borders and smuggle alcohol across. However the measure would have had a larger chance of survival, if the gangs throughout America had not been as organized. Their careful arrangement and planning meant that even if America was a smaller country, it would be still possible to smuggle alcohol into the country, emphasizing that organized crime was hence a more important reason in the failure of Prohibition than the fault in its construction. Overall, historical evidence presents various reasons for the failure of Prohibition. Although some historians like Parrish and Johnson may argue that the government was responsible for not enforcing it effectively enough, it was the strong rise in organized crime which caused the failure of the measure. As argued by Murphy prohibition could not succeed because the involvement of gangs in major cities was too strong too control and not enough illegally smuggled alcohol was intercepted, to make the system work. In addition oragnised crime caused other problems in the country, like bribery and corruption. Although, Wall Street Crash made the situation more difficult for the government to manage, it would have been easier if it wasn't for the organized crime. ...read more.