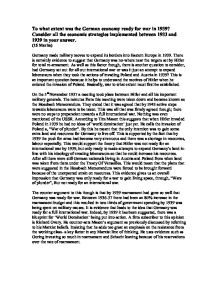 To what extent was the German economy ready for war in 1939? Consider all the economic strategies implemented between 1933 and 1939 in your answer.

To what extent was the German economy ready for war in 1939? Consider all the economic strategies implemented between 1933 and 1939 in your answer. (15 Marks) Germany made military moves to expand its borders into Eastern Europe in 1939. There is certainly evidence to suggest that Germany was no-where near the targets set by Hitler for total re-armament. As well as this factor though, there is another question to consider, had Germany set out for all out international war or was it just an attempt to expand lebensraum when they took the actions of invading Poland and Austria in 1939? This is an important question because it helps to understand the motives of Hitler when he ordered the invasion of Poland. Basically, war to what extent must first be established. On the 5th November 1937 a meeting took place between Hitler and all his important military generals. The minutes from this meeting were taken down and became known as the Hossbach Memorandum. They stated that it was agreed that by 1943 active steps towards lebensraum were to be taken. This was all that was firmly agreed though; there were no steps to preparation towards a full international war. Nothing was even mentioned of the USSR. According to Tim Mason this suggests that when Hitler invaded Poland in 1939 he had no ideas of 'world domination' just yet. ...read more.

This was first seen in 1934 thought in Schacht's New Plan. Regulations on imports and exports were made. Importers into Germany were forced to apply for permits so to regulate the commodities. This policy is known as a protectionist policy. Farming protection was also a huge part of this policy of autarky. This provided Germany with food so that they could fight on without looking to import from abroad. It was in farming and agriculture that autarky could not be achieved. From 1932 to 1938 there had only been a slight increase in production rates. And this was with a rapidly growing population. This would mean that it was not possible for the economic expectation to be where it should be if a world war was to take place in 1939. Hence, the economy was not ready for war by 1939 as the policy of autarky had not been achieved. This would suggest that when Hitler invaded Poland in 1939 he was trying to gain living space to make Germany stronger. This is in-line with Mason's view of, "War of plunder". Another rather famous thought of Hitler's was to achieve total employment. By this he meant that everyone that could work was in work. Not only would this mean that every person would be regulated and watched over, and indeed, kept out of trouble but it also had massive positive effects on the economy. ...read more.

In 1938 the production for rubber was only at 4.2% of its target for 1940, explosives only 20.2 for the same dates. This showed an inadequacy in the materials needed by 1940 for war. The invasion of Poland therefore can be seen only as a mission for living space and resources, in which Germany lacked both. From this analysis it is fairly plain to see that Germany's invasion of Poland in 1939 was not an attempt to trigger a world scale war. Nor was it hopeful of beginning the quest for world domination. Instead it is more in-line with Mason's view that the invasion of Poland was a, "War of plunder". In which the resources of Poland would be plundered or stolen and used for Germany's benefit. It is true that Germany had achieved many of their economic aims by 1939, economic recovery, arms production but more importantly total employment. Indeed these were essential if Germany was to launch an attempt at world domination but, would not suffice without the ultimate goal of autarky being achieved. This by 1939 was not. It is mentioned by Hitler many times throughout his tyranny in Germany that before Germany could achieve world domination there would need to be total autarky. It was even laid down in his book, Mein Kampf. This ultimately means that the German economy couldn't have been ready for war in 1939 because it did not match up to Hitler's standards. ...read more.