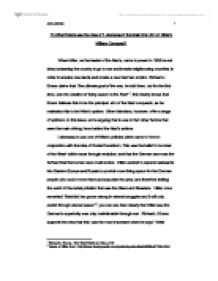 To What Extent was the Idea of 'Lebensraum' the Main War Aim of Hitler's Military Conquest?

To What Extent was the Idea of 'Lebensraum' the Main War Aim of Hitler's Military Conquest? When Hitler, as the leader of the Nazis, came to power in 1933 he set about preparing the country to go to war and invade neighbouring countries in order to acquire new lands and create a new German empire. Richard J Evans claims that "the ultimate goal of the war, he told them, not for the first time, was the creation of 'living space' in the East"1; this clearly shows that Evans believes this to be the principal aim of the n**i conquests, as he maintains this to be Hitler's opinion. Other historians, however, offer a range of opinions on this issue, some arguing that is was in fact other factors that were the main driving force behind the n**i's actions. Lebensraum was one of Hitler's policies which came to form in conjunction with the idea of Social Darwinism. This was the belief in 'survival of the fittest' within races through evolution, and that the German race was the furthest that the human race could evolve. Hitler wanted to expand eastwards into Eastern Europe and Russia to provide more living space for the German people who would move there and populate the area, and therefore ridding the world of the racial pollution that was the Slavs and Russians. ...read more.

The Treaty also meant Germany lost a lot of territory, but this will be discussed as a separate factor as it an external condition. The acceptance of War Guilt, the drastic restrictions on the size of their army, and the reparations they had to pay to the allies causing rapid inflation, worsened by the Wall Street Crash of 1929, humiliated Germany and left them in a very vulnerable position. Fritz Fischer agrees with this when he states that "a constant aim of the German governments had been, to effect, a revision of the Versailles settlement9". One way that Germany could repudiate the terms of the treaty could be to wipe out the allies who enforced it, and the obvious support of the renunciation of the treaty that Fischer discusses would prove to back up that Hitler would have received a lot of support for doing this. Fischer also says that all Governments had this as an aim, therefore showing that most Germans, no matter which political party they belonged to (which was such an important part of a German's everyday life) would have supported this reasoning. It is important however to notice that Fisher is of German origin and therefore is very possibly biased in his attitudes towards his nation's history, trying to talk down the discussion of the Jewish genocide. ...read more.

Again this suggests that the unification of German speakers and the repossession of their lost territories is in fact a measure towards the success of the Lebensraum plan, and therefore not the main War aim. From this evidence I feel I can derive that the other options I suggested, destruction of Jewish Bolshevism; repealing the terms of the Versailles Treaty; regaining lost territories and Bismarck era pride, were all in fact steps towards achieving the overall mission of Lebensraum. Richard J Evans sums this up well when he says that "[German] foreign policy was no longer conducted between states, but between races"17. This implies that the Nazis imperial aims were not in fact against specific nations, but against racial denominations, hence why Hitler discusses the destruction of Russia as the result of the annihilation of Jewish Bolshevism, not that his objective was simply to destroy Russia. General Friedrich von Bernhardi's book was incredibly influential on the n**i movement, stating that "War is a biological necessity"18, this essentially captured the main reasoning behind the n**i offensive action against other nations. Therefore I feel I can safely conclude that it was in fact Lebensraum that was Hitler's main war aim. His obsession that the Germans should conquer land in order to provide living space for their grand, new Empire of superior beings was the overall purpose of the n**i movement as we have seen from the evidence given by separate Historians, and Hitler himself. ...read more.