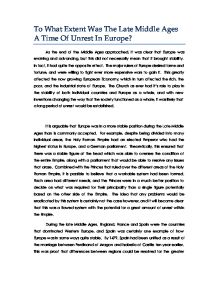 To What Extent Was The Late Middle Ages A Time Of Unrest In Europe? As the end of the Middle Ages approached, it was clear that Europe was evolving and advancing, but this did not necessarily mean that it brought stability. In fact, it had quite the opposite effect. The major rulers of Europe desired fame and fortune, and were willing to fight ever more expensive wars to gain it. This greatly affected the now growing European Economy, which in turn affected the rich, the poor, and the industrial state of Europe. The Church as ever had it's role to play in the stability of both individual countries and Europe as a whole, and with new inventions changing the way that the society functioned as a whole, it was likely that a long period of unrest would be established. It is arguable that Europe was in a more stable position during the Late Middle Ages than is commonly accepted. For example, despite being divided into many individual areas, the Holy Roman Empire had an elected Emperor who had the highest status in Europe, and a German parliament. Theoretically, this ensured that there was a stable figure at the head which was able to oversee the condition of the entire Empire, along with a parliament that would be able to resolve any issues that arose. Combined with the Princes that ruled over the different areas of the Holy Roman Empire, it is possible to believe that a workable system had been formed. ...read more.

This could have had dangerous ramifications for Europe as a whole, and Pope Leo X wanted to prevent this. As Charles was already ruler of Spain and the Netherlands, he had now become the dominant power in Europe. With one person having such a large influence in Europe, the stability of the continent was always going to be at risk. Finally, attempts were made to centralise the power to the Emperor. However, the Princes were not willing to surrender the power and the Holy Roman Empire remained divided. If centralisation of power had been successful a more stable Europe would have been a possibility, but without this, the existing divides remained and an unstable country and continent resulted. As well as the instability being generated by the Holy Roman Empire, Western Europe was having its own problems, especially between France and Britain. The long wars, including the 100 Years War, were having a damaging effect on both the condition of the individual countries and the long-term relationship between the countries. With two of Europe's major countries continually in conflict, the general stability of Europe would always be at risk. Also, as well as the wars with France, England was having its own internal problems. The War of the Roses is one of the most important aspects of English history, and the volatility it caused within the country radiated to the other countries of Europe. Leading on from this, the wars between France and Italy, and Spain and the Holy Roman Empire were always going to be damaging to the stability of Europe. ...read more.

This created an even larger bridge between the rich and the poor, which is an obvious cause of unrest. The poor people were not happy with how they were being exploited for people such as the Fugger's gain, and they were especially unhappy with how they were made to pay high levels of taxes when the extremely rich families did not have to. Inflation, and especially the Great Price Rise, were also large causes of turbulence in the late Middle Ages. As the economy continued to grow through the early 16th Century and populations rose, there was a greater demand for goods, so accompanied with the increase of money in Europe, prices were able to rise. Wages were not rising though, leading to poverty for many individuals. The vast amounts of people who were negatively affected by this felt greatly aggrieved, feeling that wages should be rising with the inflation, but when they did not, conflict was always a possibility. Accompanied with these consequences were the negative effects of Monopolies and Debasements, and it is clear that all of these combined effects were creating a great deal of unrest within Europe. To conclude, the late Middle Ages were certainly a time of unrest in Europe. With so many divisions within countries, it was unlikely that stability and co-operation between other countries would be possible. The changes in religious ideologies, the economy, the increasing number and growing sizes of wars and society as a whole were creating tension between countries and ultimately unrest throughout the continent. It was clear that beliefs were changing, and that they were not going to change without considerable disturbance. ...read more.