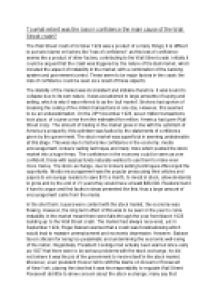 To what extent was the loss in confidence the main cause of the Wall Street crash?

﻿To what extent was the loss in confidence the main cause of the Wall Street crash? The Wall Street crash of October 1929 was a product of a many things; it is difficult to put sole blame on factors like "loss of confidence" as this loss of confidence seems like a product of other factors, contributing to the Wall Street crash. Initially it could be argued that the crash was triggered by the nature of the Bull market, which included the aspect of Instability in the market, with a combination of the banking system and government control. These seem to be major factors in the crash; the loss of confidence could be seen as a result of these aspects. The stability of the market was inconsistent and instable therefore it was bound to collapse due to its own nature. It was accustomed to large amounts of buying and selling, which is why it was referred to as the ?bull market?. Brokers had spoken of breaking the ceiling of five million transactions in one day. However, this seemed to be an underestimation. On the 28th November 1928, seven million transactions took place, of course a rise from the estimated five million. ...read more.

This was the government control over the systems. For instance, the great bull market was under the policy of ?laissez-faire? meaning the government had no effective control over its activities. The Federal Reserve board could raise the rediscount rate in order to discourage further borrowing; however, the board reduced the rediscount rate from four per cent to 3.5 per cent in 1927. This of course encouraged the bull market, a factor in the crash. In December 1928 however, it finally raised the rediscount rate to five per cent, yet this had little effect on the market running out of control, therefore it was a decision made too late. The Federal Reserve board was in fact quite powerless at this stage as the proposal to raise the rediscount rate to six per cent had been over ruled by the New York reserve bank as there were plenty of takers at twice that level of interest. Eventually in August 1929 the rediscount rate had been raised to six per cent, ironically the board was worried that if the rediscount rate was increased too much, a crash might result. The higher interest rates would not be a satisfactory option for bankers albeit in the interest of the country to control credit through these high interest rates. ...read more.

This could be argued as a final push to the crash of the Wall Street. People started to panic after hearing rumours; they began questioning the market thus resulting in a fear of collapse. Overall, the idea that the loss of confidence in the stock market caused the Wall Street crash is only true to a minimum extent. The build-up and instability of the bull market is presented as the main reason. To start with the stock market was a product of extreme confidence, making it vulnerable in itself to begin with. The loss of confidence was a factor of the stock market being at such a high, as it meant people had more to fear, the idea that the ?higher you are the further you fall? seems to fit in line, as the confidence shattered once people realised just how prone to a collapse they could be, seeing the British enterprise collapse made them fear their own Bull market. The main cause of the crash was the great bull market and lack of government control to keep credit in check, which led to loss of confidence, the loss of confidence is not a sole cause, it is in fact a product of other factors. By Georgia Markou ...read more.