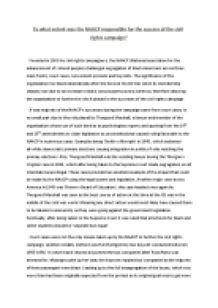 To what extent was the NAACP responsible for the success of the civil rights campaign?

﻿To what extent was the NAACP responsible for the success of the civil rights campaign? Founded in 1909 by civil rights campaigners, the NAACP (National association for the advancement of colored people) challenged segregation of black Americans across three main fronts; court cases, non-violent protests and boycotts. The significance of the organization increased dramatically after the Second World War when its membership sharply rose due to an increase in black consciousness across America, therefore allowing the organization to further the role it played in the successes of the civil rights campaign. A vast majority of the NAACP?s successes during the campaign came from court cases, in no small part due to the role played by Thurgood Marshall, a lawyer and member of the organization whose use of such devices as psychologists reports and quoting from the 14th and 15th amendments to claim legislation as unconstitutional caused ruling favorable to the NAACP in numerous cases. Examples being ?Smith v Allwright? in 1945, which outlawed all-white democratic primary elections causing integration in politics if only reaching the primary elections. ...read more.

In which black citizens boycotted the bus companies after Rosa Parks was arrested for refusing to give up her seat, the boycott crippled bus companies as the majority of their passengers were black. Leading up to the full desegregation of the buses, which was more than had been originally expected from the protest as its original goal was to get more black bus drivers and have more respect on the buses. This boycott began to show the civil rights movement that something can be achieved when the black community stands together in unity for a common goal. However, this was not the only thing that came from the bus boycott it was also the platform that launched the career of arguably the most important figurehead of the campaign, Martin Luther King. After recently moving to Montgomery he was selected as a leader as he was seen as impartial, this in turn led to advancements such as the Southern Christian leadership committee being set up by King and him heading up the Montgomery Improvement association. ...read more.

Small protests eventually spawned the formation of the SNCC (student non-violent coordinating committee), which arranged campaigns such as one in Mississippi which had aimed to raise voter registration as this state had the lowest percentage of registered black voters. Furthermore, it was just black organizations or leaders that pushed towards civil rights equality it also came from federal bodies even rising to the President bringing in new legislation. It was first Truman that challenged the civil rights issue in 1947, when he formed the Presidential committee on civil rights which called for an end to racial segregation which was followed by Presidential orders to desegregate the military. After this even Eisenhower passed a civil rights act in 1957. To conclude, the NAACP made significant impact during the civil rights campaign both in bringing in new legislation and using non-direct action, but also later using the Montgomery bus boycott to unite the black community. However, to allege that responsibility lies solely in the hands of the NAACP would be unjustified as it can be argued that individuals and federal involvement made an equal or further significant change to the face of the civil rights campaign. ...read more.