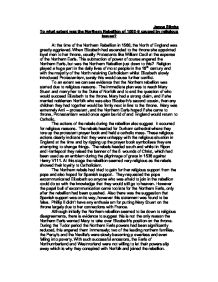 To what extent was the Northern Rebellion of 1568-9 caused by religious issues?

Jenna Sliwka To what extent was the Northern Rebellion of 1568-9 caused by religious issues? At the time of the Northern Rebellion in 1568, the North of England was greatly aggrieved. When Elizabeth had ascended to the throne she appointed loyal men to her throne, usually Protestants like William Cecil at the expense of the Northern Earls. This subtraction of power of course angered the Northern Earls, but was the Northern Rebellion just down to this? Religion played a huge part in the daily lives of most people in the 16th century and with the majority of the North retaining Catholicism whilst Elizabeth slowly introduced Protestantism, surely this would cause further conflict. To an extent we can see evidence that the Northern rebellion was started due to religious reasons. The immediate plan was to reach Mary Stuart and marry her to the Duke of Norfolk and to end the question of who would succeed Elizabeth to the throne. Mary had a strong claim, and if she married nobleman Norfolk who was also Elizabeth's second cousin, then any children they had together would be firmly next in line to the throne. ...read more.

They requested the pope excommunicated Elizabeth so anyone who was afraid to join in the rebellion could do so with the knowledge that they would still go to heaven. However the papal bull of excommunication came too late for the Northern Earls, only after the rebellion had been quashed. Also there was the suggestion that Spanish support was on its way, however this statement was found to be false. Phillip II didn't have any enthusiasm for putting Mary Stuart on the throne largely due to her connections with France. Although initially the Northern rebellion seemed to be down to religious disagreements, there is evidence to suggest this is not the only reason the Northern Earls wanted Mary to take over Elizabeth's position on the throne. During the Tudor period the Northern Earls powers had been significantly reduced, this angered them immensely; two of the leading northern families, the Percy's and the Neville's were slowly becoming powerless and even falling into poverty. ...read more.

Another reason for the Northern Rebellion of 1569 was the fact that nobility agreed to stick together, when Norfolk initiated the plot others joined him out of respect. Also Westmorland was related to him, he was Norfolk's brother in law. Perhaps if Norfolk didn't have somewhat powerful support as this the rebellion would not have got off the ground. The ideas for the rebellion did not originate when in church or anywhere remotely connected to religion but in court where the Nobles questioned the succession, argued that they deserved their powers and was plotting ways of getting rid of Cecil. To conclude, although religion did play a part in the rebellion of 1568-69 it was clearly not the only reason for the unrest of the Northern nobility. Power was a big cause, their pride was dented and they wanted to be powerful like their relations gone before them. The North was indeed largely Catholic and they hoped if England was to get a catholic queen in the form of Mary Stuart then the situation for them would become better, not only religiously but politically as well as socially. ...read more.