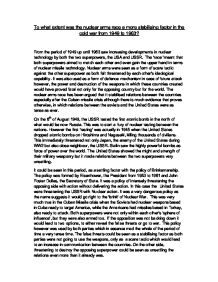 To what extent was the nuclear arms race a more stabilising factor in the cold war from 1949 to 1963?

To what extent was the nuclear arms race a more stabilising factor in the cold war from 1949 to 1963? From the period of 1949 up until 1963 saw increasing developments in nuclear technology by both the two superpowers, the USA and USSR. The 'race 'meant that both superpowers aimed to match each other and even gain the upper hand in terms of nuclear missile technology. Nuclear arms were seen as a form of scare tactic against the other superpower as both felt threatened by each other's ideological capability. It was also used as a form of defence mechanism in case of future attack however, the power and destruction of the weapons in which these countries created would have proved fatal not only for the opposing country but for the world. The nuclear arms race has been argued that it stabilised relations between the countries especially after the Cuban missile crisis although there is much evidence that proves otherwise, in which relations between the soviets and the United States were as tense as ever. ...read more.

This policy however was used by both parties which in essence mad the whole of the period of time a very tense time. The false threats could be seen as a stabilising factor as both parties were not going to use the weapons, only as a scare tactic which would lead to an increase in communication between the countries. On the other side, threatening to destroy the opposing superpower could be seen as unsettling the relations even more than it already was. M.A.D. (Mutually Assured Destruction) could also be a Stabilising factor in this period as it caused both sides to rethink their strategies. Both sides had enough nuclear weaponry to annihilate the other and to even counter-strike when hit first. Both sides knew that using this strategy would prove too costly so for their own need they needed another approach. A more flexible approach in which the sides would use smaller, targeted missiles achieving to hit a specific area would be more worthwhile as it would limit the amount of action and devastation that the arms could bring. ...read more.

They were literally hours from nuclear war. However there other factor that played into the formation of the treaty. The Soviet Union were in economic turmoil especially when they were paying almost a third of their GMP on arms. America was also in turmoil especially with the Vietnam War heating up and domestic issue of civil rights. In conclusion, after looking at the period of 1949-1963, the nuclear arms race was a stabilising factor in the cold war although things could have been the complete opposite. The risk of using Brinksmanship could have ended in war and eventual devastation of the world. Both countries, for their own sake needed to come to some agreement to limit the arms. By using the 'hot line' telephone link both superpowers could prevent each other with great speed which helped misunderstanding especially when Khrushchev had a very unpredictable mind. The test ban treaty of 63' also helped limit the use of unsettling use of the weapons but it dragged other powerful nations such as China and France into the mix when they disagreed against the treaty. ?? ?? ?? ?? ...read more.