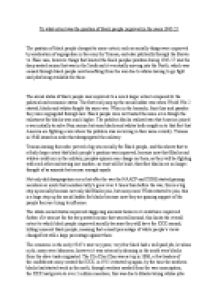 ﻿To what extent was the position of black people improved in the years 1945-55 The position of black people changed to some extent, such as socially things were improved by eradication of segregation in the army by Truman, and also politically through the Brown vs. Blair case, however things that limited the black peoples position during 1945-55 was the deep-seated r****m that was in the South and it eventually moving into the North, which was caused through black people now benefiting from the war due to whites having to go fight and jobs being available for them. The social status of black people was improved to a much larger extent compared to the political and economic status. The first real jump up the social ladder was when World War 2 started; blacks and whites fought the same war. When in the barracks, front line and parades they were segregated through law. Black people were not treated the same even though the enlistment for blacks was much higher. ...read more.

The economic in the early 1945?s was very poor, very few black had a well paid job, let alone a job, many were labourers, however it was extremely alarming in the south were blacks from the slave trade originated. The Klu Klux Klan was set up in 1886, a few leaders of the confederate army created the KKK, in 1915 it started up again, by the time the southern blacks had started work in the north, through workers needed from the war conscription, the KKK had grown to over 2 million members, this was due to Blacks taking whites jobs through cheaper labour for the company. This shows that to a small extent the economic status of blacks increased due to jobs being created in the industrial north to help replace the whites that left their jobs to help with the war effort. This is turn shows that they improved economically through families now having a steady income, and an added bonus was that many blacks throughout the war period were promoted, as they could do the same job but at a cheaper price. ...read more.

The overall extent to which the black peoples position improved to a large extent, this is due to the positives outweighing the negatives. The major successes were socially and politically, but that doesn?t mean to speak that they didn?t achieve great success economically, because they did, a regular income for a black family was a huge success, and being promoted in a job created room for other blacks to gain a job, the social success was through Truman ordering the desegregation of the military, this meant that whites could now socialise and see how Blacks are not animals they are humans beings exactly the same as whites, however the deep-seated r****m was still around meaning there was still a barrier blocking blacks obtaining full equality. The political success was through the Supreme Court overriding a state law, for Blacks to have the highest court in America on their side in education, now gave Blacks and equal right to education, however students having to be escorted to their school showed deep-seated r****m was still a huge barrier to success for blacks obtaining an equal position in society as a whole. ...read more.