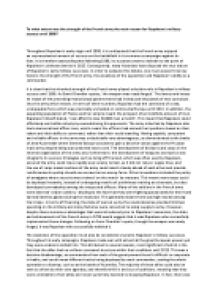 To what extent was the strength of the French army the main reason for Napoleons military success until 1808?

﻿To what extent was the strength of the French army the main reason for Napoleon?s military success until 1808? Throughout Napoleon?s early reign until 1808, it is undisputed that the French army enjoyed an unprecedented amount of success on the battlefield in its numerous campaigns against its foes. It is therefore astounding that following 1808, its successes start to dwindle to the point of Napoleon?s ultimate demise in 1815. Consequently, many historians have disputed the true nature of Napoleon?s early military successes. In order to evaluate this debate, one must assess three key factors: the strength of the French army, the weakness of the opposition and Napoleon?s ability as a commander. It is clear that the inherited strength of the French army played a decisive role in Napoleon?s military success until 1808. As David Chandler quotes, ?the weapon was ready forged?. The levees and levees en masse of the preceding revolutionary governments had introduced thousands of new conscripts into the army which meant, in terms of sheer numbers, Napoleon had the command of a vast, unstoppable force which was practically unrivalled on continental Europe until 1813. In addition, the expanding population of France and her empire meant the prospect of an indefinite amount of men. Napoleon himself stated, ?I can afford to lose 30,000 men a month?. This meant that Napoleon could effectively win battles simply by overwhelming his opponents. ...read more.

This was a decisive disadvantage, as commanders from each of the great powers found it difficult to cooperate in battle, and could mean different tactics being deployed by each commander, casting the whole operation to disarray, such as at the battle of Austerlitz. The majority of these allies could also be seen as driven by their own agendas, and therefore fell in and out of coalitions, meaning that they were unreliable to their allies and never quite fully devoted to stopping Napoleon. In fact, there was no formal coalition until 1814, under the treaty of Chaumont. The allies also had the disadvantage of having to cope with the conflicting pressures of the domestic front versus their foreign policy. Unlike France, the allied nations did not have a limitless budget for war. Napoleon did not share this problem, as he was both the head of state and commander in chief of the army, meaning he could divert money to whichever state sector he wanted, when he wanted. In effect, France?s domestic policy directly supported its foreign policy, as it was fighting to preserve the gains of the revolution. In contrast to the French army, the allies still fought by 18th century tactics, and in reality had undergone little military reform. Officers were still selected on the basis of social standing rather than ability, which did not ensure competence for commanding troops and there were no ?citizen soldiers? among their ranks. ...read more.

effectively. Furthermore, Napoleon was a very gifted strategist and tactician. His innovative ideas were often key to the success of the French army. Tactics such as quick deployment of troops from one area to the next were vital and valuable, as demonstrated at the battle of Ulm, where Napoleon secretly moved the entire Grande Armee from the north western shores of France to face the Austrians at Ulm in a matter of days. In conclusion, the inherited strength of the French army was surely a fundamental reason for French military success until 1808, although not the most important. Evidently, the state of the army, its new tactics and weaponry could be seen as the basis for France?s military victories but as is demonstrated by its position in 1799, it took Napoleon to realise its true potential. Despite its weaknesses, the alliance of great powers had held off the French army and had it in retreat when Napoleon returned from his Egyptian campaign, showing that the French were also weak without the strong unified leadership Napoleon introduced when he stepped in as first consul. In seven years, Napoleon had taken France?s conquests from northern Italy and parts of Belgium, to most of continental Europe. Napoleon once quoted ?in war men are nothing; one man is everything.? Despite the military developments in the French army such as the democratisation of the officer core, policy of amalgame and levees had been introduced before Napoleon took power, he was the one to exploit them successfully and hence gain military success. ...read more.