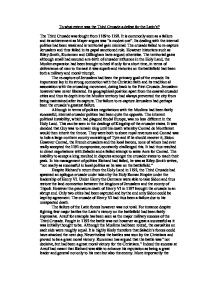 To what extent was the Third Crusade a defeat for the Latins?

To what extent was the Third Crusade a defeat for the Latin's? The Third Crusade was fought from 1189 to 1192. It is commonly seen as a failure and its achievement as Mayer argues was "a modest one". Its dealing with the internal politics had been weak and is territorial gain minimal. The crusade failed to re-capture Jerusalem and thus failed in its papal sanctioned role. However historians such as Riley-Smith, Runicmen and Gillingham have argued otherwise. The territorial gains although small had secured a re-birth of crusader influence in the Holy Land, the Muslim expansion had been brought to heel if only for a short time, in terms of deliverance of men to the east it was superb and victories on the battlefield had been both a military and moral triumph. The re-capture of Jerusalem had been the primary goal of the crusade. Its importance lay in its strong connection with the Christian faith and its tradition al association with the crusading movement, dating back to the First Crusade. Jerusalem however was never liberated. Its geographical position apart from the coastal crusader cities and thus its depth into the Muslim territory had always prevented the city from being maintained after its capture. The failure to re-capture Jerusalem had perhaps been the crusade's greatest failure. Although in terms of politics negotiations with the Muslims had been fairly successful, internal crusader politics had been quite the opposite. The inherent political instability, which had plagued feudal Europe, was no less different in the Holy Land. ...read more.

For what it was the re-establishment of the crusader cities had been very successful. No better an example can be seen that the capture of Acre on 12th July 1191. Perhaps the most successful of all the territorial gains was the re-capture of Acre. It's capture yielded not only an important moral victory for the Christians but also a significant material gain. The Muslim source, Bah'ad-din recorded contents, its ships and military stores, which contained all the military equipment from Palestine, Jerusalem, Damascus, Aleppo and Egypt. In addition to this the term gained by it's surrender were two hundred thousand gold pieces paid to the Franks, and extra one hundred for Conrad personally and fifteen thousand Christian prisoners, with one hundred of rank, liberated. The conquest of Acre was therefore successful not only in it's strategic position as a major fortified coastal city, but also sheer amounts of resources it provided. Despite this the victory was not a successful as first appears. Mayer has discussed that; "the losses during the siege had been heavy" which is indeed true. Deaths included Queen Sibylla, Patriarch Eractius, five Arch Bishops, six bishops, four abbots, a prior, an archdeacon, two dukes, a landgrave, ten counts, three viscounts and thirty great nobles. The chaplain of Baldwin also writes, "on the 25th 1190 more than 4000 foot soldiers were slain by the Turks." The success of Acre had perhaps bee exaggerated. Although, it is true that it was captures and subsequently a great amount of wealth came from it, it had been at the cost of a significant number of lives, both noble and common. ...read more.

Muslim expansion in the later twelfth century had seen an almost total Islamic domination of Egypt, Palestine and Syria. In terms of territory that Third Crusade had made very little difference to this. Only the coastal cities down to Jaffa had been conquered and secured. These however would only survive for another hundred years. Local politics may had been dealt with inefficiently although this was more down to the territorial values of the nobles in medieval society. Only once Henry had married Isabella, Conrad de Monferret's widow, had the problem been solved. The epilogue crusade of Henry VI saw little success either. Due to Henry's premature death the Latins had only been able to secure one city. The failure to recapture Jerusalem was the Latin's greatest failure. However this outward defeat is not entirely accurate. The Latins in truth had made significant achievements in the Holy Land. Although the east was still chiefly in Muslim hands, the crusaders had achieved a re-birth of Christian Outremer, and secured it. The Islamic expansion had not been stopped but it had been halted. On the battlefield the Latins found continued success. Although not as decisive as some sources recorded, the battle of Arsuf and the defence of Jaffa were both brilliant moral and military victories. The acquisition of territory, however slight, proved to be very successful in the resources gained. The conquest of Cyprus and the liberation of Acre demonstrate this. In its failure to recapture Jerusalem and pacify the Islamic threat in the east, the Third Crusade had failed. However given the difficult position of the Christians, it is as Gillingham writes, "amazing that they achieved as much as they did." ...read more.