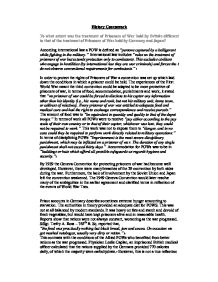 History Coursework To what extent was the treatment of Prisoners of War held by Britain different to that of the treatment of Prisoners of War held by Germany and Japan? According international law a POW is defined as "persons captured by a belligerent while fighting in the military." International law includes "rules on the treatment of prisoners of war but extends protection only to combatants. This excludes civilians who engage in hostilities (by international law they are war criminals) and forces that do not observe conventional requirements for combatants."1 In order to protect the rights of Prisoners of War a convention was set up which laid down the conditions in which a prisoner could be held. The experiences of the First World War meant the third convention could be adapted to be more protective of prisoners of war, in terms of food, accommodation, punishments and work, it stated that "no prisoner of war could be forced to disclose to his captor any information other than his identity (i.e., his name and rank, but not his military unit, home town, or address of relatives). Every prisoner of war was entitled to adequate food and medical care and had the right to exchange correspondence and receive parcels." The amount of food was to "be equivalent in quantity and quality to that of the depot troops." ...read more.

The first book uses sources from the Public Records Office, the Imperial War museum and the Australian War Memorial. A POW describes the lack of room in a camp in Singapore. "When I awoke in the morning I was still on the outhouse floor at the casualty clearing station", Reginald Burton.19 This shows it was beyond the medical staffs' capacity to house the POWs. This interpretation of Japanese treatment is from the book Railway of h**l by Reginald Burton. The books 'Railway of h**l' and 'The Emperors Guest' are primary accounts and similarly like the accounts of German and British treatment may be questionable. This is due to the inherent bias that it will contain the effects of the passage of time and the possibility that false memories may have been created. Appendix 821 is a photograph illustrating the limited accommodation provided. However, the image shows the outside of the building from one camera angle. Each country had problems with housing POWs. Both Britain and Germany violated the Geneva Convention to deal with the problem, while Japan used the prisoners for labour on the Burma-Thailand Railway. In terms of employment on the part of the British, there was a vast difference in the treatment of Italian and German POWs. The British view of Italians was different to the view of the Germans. They believed that fascism could be cured where Nazism could not. ...read more.

This act highlighted the countries intentions to comply with the Convention. However, shackling continued into 1943. Michael Walsh, historian for the 'Historian Press Review' in his article 'How the Allies treated German POWs', statement that "genocide, enslavement and institutionalised ill treatment of prisoners"32 were true of both sides. The punishments passed down by the Japanese were some of the most cruel and merciless of the three. Punishments when handed out consisted of the Bataan 'death marches', being hung by the thumbs, beheading and being locked in small cages made of bamboo for a period of time. The fact that the Convention was not ratified by the Japanese meant they had no specific rules by which to abide in terms of punishments except the armies own code of conduct. As such POWs were given little sympathy as surrender was not part of the army's code, Bushido. 33. The image shows an illustration by Jack Chalker example of a man being punished in one particular way; the container would hold either water or stones. Rewards were not uncommon for POWs in the case of the British Appendix 334 and Appendix 5.35 Beneath the hostilities the allies still provided equal opportunities once the war was over or repatriation had been granted. The policy was based around a points collection scheme for the criteria shown in Appendix 3. The employment of this policy shows the willingness of the British to provide fair treatment for their prisoners without prejudice. This method ensured that POWs who remained in Britain after their release prospered from equal opportunities. ...read more.