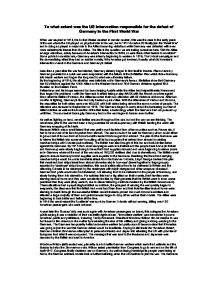 To what extent was the US intervention responsible for the defeat of Germany in the First World War When war erupted in 1914, the United States decided to remain neutral , this was the case in the early years of the war where the US played no physical role in the war, but in 1917 America did finally join the 'Great War' and in doing so played a major role in the Allies becoming victorious while Germany was defeated with even more catastrophic losses than the Allies. The title is the question we are asking ourselves here, 'Did the Allies emerge victorious, solely because of America's intervention in WWI, or were there other factors to consider?' Some points to consider are,- Germany was already beginning to weaken in 1915; The U-boat campaigns and the demoralising effect they had on soldier morale; Why America got involved; Exactly what did America's intervention meant to the Germans and Germany's defeat Less than a year after the war had started, Germany already began to find itself in trouble. Plans made by German generals for a quick war were evaporated with the failure of the Schlieffen Plan which threw Germany into trench warfare and began the long road to what was ultimately failure. By the beginning of 1915, the situation was definitely not in Germany's favour. Statistics show that Germany had 90 divisions against the 108.5 Allied on the Western front and 78.5 German divisions against 93.5 Russian on the Eastern Front. ...read more.

A year later the 'Sussex' ship was sunk again with American passengers on board, this outrages the American public saying it was a violation of their neutrality rights at sea . 'Immediate warfare' was demanded by some American public and politicians, including Teddy Roosevelt. President Woodrow Wilson did not resolve to war but issued a firm stance on the matter by increasing the size of his military and giving a strong warning to the Germans. The Germans temporarily halted submarine warfare but pretty soon it became clear that if America was going to join the war that German defeat would be inevitable. Hoping to eliminate the 'American threat', German minister Zimmerman attempted to persuade Mexico and Japan into attacking the US with promise of European land after it was conquered. The message that was sent to the Mexicans and Japanese was decoded by the British and sent to America Woodrow Wilson (left) wanted war, primarily due to hostile German warfare which sank the Lusitania and the Sussex but also the Zimmerman note. Wilson asked permission from Congress to go to war and on the 6th of April 1917, Congress finally declared war on Germany. As well as facing hardships its people were facing at home, the German soldiers morale took a further battering when the US decided to join the war. The Germans knew that America was a major world power and now was its chance to prove itself. America seemed to have limitless money and weapons which the Germans knew all too well. ...read more.

On the 11th of November the official armistice was signed and it officially ended the war, though the war was over a long time before America joined in. Looking at all the factors that I have mentioned, I do think that America had a large influential role in the allies becoming victorious at the end of the war but it has to be said that it wasn't solely because of the Americans that the Allies won. Germany was beginning to fade quickly even at the start of the war, as soon as 'Trench warfare' set in and with the failure of the Schlieffen Plan, it was plain to see that war wouldn't last up until Christmas (something that the British were better prepared for). I also think that the successful U-boat campaigns against the Germans by blocking German ports and not allowing food to get into Germany was also a decisive factor as it lowered German soldiers morale thus waning their performances allowing the Allies to exploit the chinks in the armour of the Germans. The replacing of one old and tired ally in the form of Russia with the new fresh American troops meant that the Allies were very lucky. The Allies were beginning to tire a great deal by this stage and war could have lasted more years yet, but with the arrival of America (who seemed to have limitless money, weapons, ships and fresh men) it seemed once again to turn in favour of the Allies and had yet another big blow to the Germans. ...read more.